After 10 days of (mostly) no power, we got our power back (again) yesterday. I didn’t put the extension cords away. We’ll see……..

MEANWHILE. I had another exciting moment when the donkeys and Patriot got out of their pasture. Apparently, when some friends were over visiting the animal pastures the other day, the gate to the “equine” field wasn’t shut back right and nobody noticed until, you know, the donkeys and Patriot were in the yard. I easily whisked the donkeys back with a couple of sugar cookies, but Patriot was less cooperative.

Morgan got his halter and tried to pull/lead him back.

He didn’t want to go. 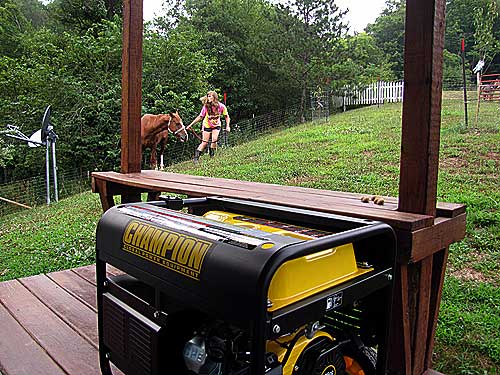 I left her to it for several minutes, then when the situation starting looking slightly out of hand because Patriot was starting to drag her around a little, I had a vision. A vision! I knew exactly what horse trainer Mike would do. Or, you know, sorta kinda. And my brain/body was overtaken by a pod person, and I said, “Morgan, let me show you what the horse trainer would do!”

Seriously. That was just ridiculous.

Morgan was exasperated enough to hand me the lead.

Which was seriously ridiculous.

But the pod person had control of me, so I took it.

The horse trainer uses the Clinton Anderson method, and I don’t know the correct Clinton-Anderson-method words to use, so please excuse my layman’s wording. I took hold of that lead like I meant it and I made several short, powerful yanks at it, jerking both down and upward/forward, forcing Patriot’s head (and attention) on me, and what do you know but that horse snapped to attention and started walking toward me (and toward the gate)–instead of pulling away, which was what he was doing when Morgan tried to pull the lead. There’s something about those short, swift jerking pulls up on the lead that transforms the horse’s mindset. I have seen the trainer do this to snap Zip’s attention to him and what he wants her to do (not necessarily moving the horse forward, also can be backward, if the horse is stepping into his personal space, etc).

So then, immediately FREAKED OUT by my surprising total control of this massive animal, I yelled at Morgan to come take the lead away from me! I have control of a horse, someone save me. She easily put him back in the pasture. I said, “Morgan, I just taught you something about horses!” She said, “Yes!” And I think neither one of us could believe it.