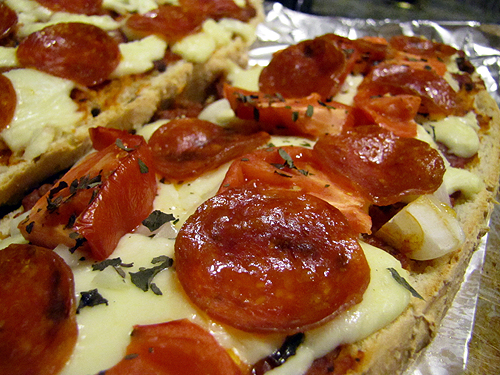 I’ve started making mozzarella again, in between trying new hard cheeses. Mozzarella is touted as a “beginner” cheese, but it’s one I’ve struggled with for some reason. (See my post on how to make mozzarella.) It was the first cheese I ever tried (total failure) and I continued to battle with it then gave up on it. I waged war on the recipe again this year, and had some success with it–but sporadic success. Sometimes it worked, other times it failed. Then I gave up on it again. Recently, I started making it again, determined to beat it. Last night I made the best mozzarella I’ve ever made–and IT WAS EASY. For the first time, it wasn’t a struggle.

And it felt so, so good to put it on top of our dinner of french bread pizza.

If at first you don’t succeed, try TRY again! I must now go apply that adage to Glory Bee, who is in the goat yard bawling her head off this morning. Beulah Petunia is angry, too, and ROARING like a dinosaur. Mayhap today would be a fine day to have an office job….