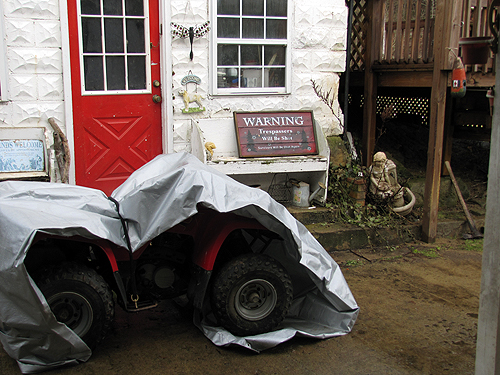 They say trouble comes in threes. First, the furnace. Second, my car. Third–water.

And I don’t mean what is today on the national news about West Virginia water. There is, in fact, a state of emergency in West Virginia in nine counties because of chemical contamination in the supply of a major water company. I do have public water to the house and the studio (because of health department approval), but the water company involved in the chemical contamination is not my water company. I also do have well water at the barn, so my animals don’t use the public water and I can get well water at the barn in an emergency. Many people don’t have the option of their own water supply, so I am fortunate. Stores in Charleston are running out of bottled water. Restaurants and schools are closed. It’s an incredible, horrible situation.

I have a completely different sort of water problem–broken pipes. Since I had my pipes redone, I’ve had very few issues with pipes breaking, but there are a few places where the old PVC pipes remain and of course that is where I had the breaks. Two breaks. The sub-zero temps really put them to the test. The breaks became evident at different times (apparently, thawing at different rates due to location), so no sooner had my neighbor fixed one than the next one showed its ugly head. The first break was fixed yesterday afternoon. The second one will be fixed today. I haven’t had water at the house since yesterday and have been dealing with the various inconveniences associated with that plus running for plumbing parts, holding a light for my neighbor while he’s fixing the pipes, etc.

My neighbor is a wonderful person who probably wishes I would either move away or get married.

And if trouble really does come in threes, the water disaster should be the end of disaster for awhile. Right? RIGHT? Because I’m just plum worn out.

P.S. That’s Ross’s ATV in the picture, which was finally delivered over here yesterday in time for Ross to come back from sea and enjoy it!