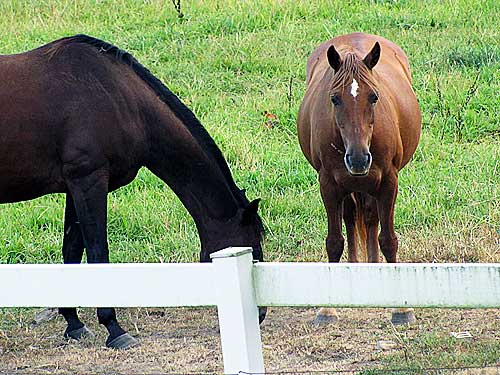 –is so much faster!!!! Like Shortcake when she doesn’t want me to catch her. I’m satellite internet. She’s DSL. NOW I KNOW WHAT TO NAME HER! DSL!! (I’m just kidding! Her name is Shortcake, I give up.)

I had HughesNet satellite internet for years. It got more reliable over time, though when I started this website, I had to use dial-up half the time because the satellite wasn’t working OR the kids exceeded our limitations and we were cut off (until later when they started letting you “buy out” exceeding your limitations, which was really just another way to make money for them, of course). I switched to WildBlue when I moved to Sassafras Farm, just to try something else. I had come to loathe HughesNet and their overseas, incomprehensible technical support. I upgraded to WildBlue’s ViaSat Exede when it became available. (That was a disappointment–I never noticed any bump in speed for the extra cost.) WildBlue has been randomly unreliable and their technical service has been no better. Of course, if you live in the country, satellite internet is often your only option. Looking back now on my experiences, if I had to make a begrudging recommendation, it would be for HughesNet. But that would be a very begrudging recommendation, based mostly on the fact that WildBlue will not allow you to “buy out” exceeding your limitations and HughesNet will. If you have teenagers, you’d better get HughesNet.

My DSL was installed here yesterday. What I love about DSL already is I don’t have to use a router. I don’t have to have a modem connected to a desktop computer (which I never use). It’s ALL wireless. There are no upload/download restrictions, which are the plague of satellite internet. It’s a whole lot cheaper. AND IT’S FASTER. Will see how it goes from here, but so far, I’m happy!

I’ve been telling satellite internet technical support people for years, “You just wait till I can get DSL.” Well, you there, you little technical support guy in India who I can’t understand a word you say, THAT DAY IS HERE.