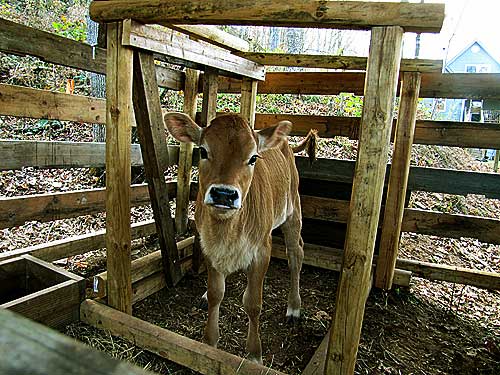 Yesterday, Glory Bee beat me to Beulah Petunia’s udder. She latched on and didn’t want to move. I sat down with my bucket and pushed her aside. Or tried to. I had to set the bucket behind me and use both hands to shove her. She moved, but came right back, determinedly jamming her mouth on one of BP’s front teats. And thus began a push and shove that lasted on and off for about 10 minutes, with frothy milk slobber flying left and right out of Glory Bee’s mouth every time she got hold of BP and I pushed her off again. There was calf slobber all over BP. Of course, all the while this ferocious battle of wills was going on under BP, mommy just kept right on peacefully munching her feed.

Nothing much bothers BP when she’s eating. She’s focused.

I knew I couldn’t let Glory Bee win. I had to show her who was in charge. I don’t know how much that calf weighs, but she feels like she weighs about 5000 pounds. She’s heavy, and she’s strong, and I wasn’t sure I was gonna win, but eventually, miraculously, I finally pushed her back for the last time and she stayed up by BP’s head until I took my bucket away and told her it was her turn. I petted her and patted her and scratched her while she nursed.

And then later BP got confused and tried to go out the milk stand sideways and I can’t even tell you all the trouble that was because she really does weigh 5000 pounds. Or something.

I went back to the house and ate two sandwiches! I think I burned 20,000 calories out there!

Anyway. I WON. Till I went back in the evening and had to conquer her all over again. This time, she tried to take her share from the other side. I let her–after I showed her that I was taking the two teats on my side and she could only have her two on her side. I had to hold onto my two like my life depended on it, but we finally managed to share. 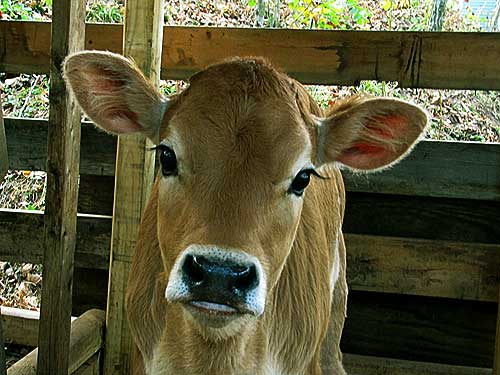 This calf’s trying to kill me.