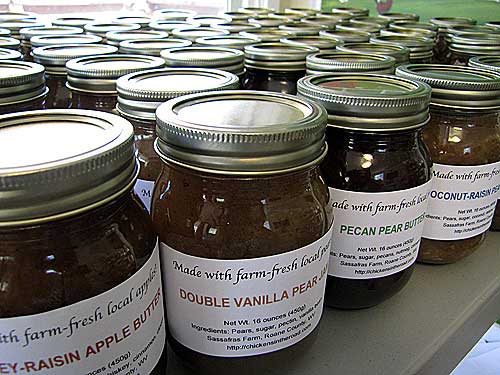 So, within the space of three days (three pickups), I shipped out about 50 boxes of mostly apple butter along with some various pear pints. If you’re not experienced with shipping items in glass, it’s always a good idea to start with a bulk venture. (Ha.) Based on the feedback I’ve had so far, which is from the first two shipments, it appears that about 10 percent of the boxes arrived with at least one broken jar. If this has happened to you, please let me know and I will promptly refund you without question.

I relied on bubble wrap in the first two shipments. I ran out of bubble wrap and some jars in the third shipment were wrapped in ye old-fashioned newspaper, so I’m interested to find out how they did in comparison to the bubble wrapped packages. Boxes from the third shipment will be finding their forever homes on Monday or Tuesday. Please don’t feel bad to let me know as I’m taking this as an educational experience! After all, I want to do this again, so I need packing feedback. Unfortunately, since I shipped so many boxes in such a short space of time, I didn’t have a chance to learn anything until it was over, but I can learn for the next endeavor. In fact, I’m planning to make candles and soap before the holidays. (Candles, of course, come in glass.) And next year, I want to make even more apple butter.

On the upside, all the feedback on what was inside the jars is enthusiastic. A few of the comments I’ve received on my apple butter: “I had to slap myself to make myself stop before the jar was empty!” “It is fantastic, it was worth the sponsorship for your kitchen.” And more like that, which was encouraging. And this one: “Good packing job.” (She didn’t have any broken jars, so I appreciated that, but had to laugh, too.)

And also: “I fear you haven’t made much $ for all your efforts.” THAT is true. (And aside from refunds.) I make my apple butter starting with 100 percent fresh local West Virginia apples from the farmers market. I simmer it long and slow, I don’t stint on the spices, and I add raisins and whiskey for more flavor. When you take in the cost of jars, apples, sugar, spices, raisins, whiskey, labels, bubble wrap, and tape, there’s not much profit in it at $5/pint, and when you include the time/labor, there’s none. (Counting refunds, I may end up at a loss–some learning experiences are rougher than others!)

HOWEVER. I enjoy doing it, which is why I do it.

HOWEVER. I could spend that time doing something else to earn money (one-woman operation here), and I can’t keep doing it for $5/pint. The “apple butter market” in this area is $6 to $7 per pint for plain apple butter. Generally, apple butter is sold by church or community groups. Some stint on the spices, some do a fantastic job, most don’t actually can it in a boiling water bath, and I’ve “heard tell” that some groups (gasp) cut corners by using bulk-size canned applesauce from Sam’s. My apple butter will always be made with real West Virginia apples, simmered long and slow, plenty of spices, with raisins and whiskey. I will probably sell it next fall for $8/pint, which may cut my orders, but I have to be realistic about the time, labor, and cost going into each jar–and I’m not willing to cut any corners on the quality or ingredients.

Side note about the canning: Apple butter is sort of a “grandfathered” product that, to my knowledge, is the only product with a blessing from the USDA to be sold “open kettle” canned, meaning not canned in a boiling water bath–simply, hot apple butter spooned into hot jars, put the lid on, you’re done. Apple butter has a high sugar content (as do almost all jams, butters, jellies, etc.), but I figure the main reason apple butter gets this special consideration is due to tradition. I do can my apple butter in a boiling water bath, though, for the higher level of preservation security. Whether or not it’s actually canned, though, is not as big of a deal, perhaps, as whether or not genuine fresh apples are inside the jar (rather than applesauce from Sam’s). If you’re buying apple butter at a festival, bazaar, etc, ASK that question.

I’ve gotten a number of emails from people whose boxes arrived intact, so it wasn’t a total fail, but I can definitely learn something from this shipping experience and improve, so thank you for the feedback!