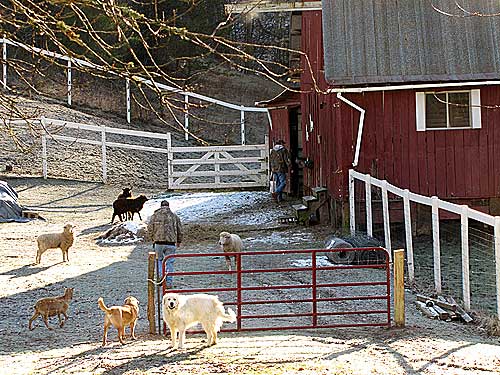 I seem to need a lot of fix-it people.

Today’s problem was a two-parter. One, no water was running to the house. First, the fix-it people went to check out the bladder tank, which is in the barn. The tank was frozen. There’s heat tape, but it was unplugged. Presumably, the previous owners unplugged it for the summer. I didn’t know it was there or anything about it, so I didn’t know to plug it back in. But, at least that problem was easy to solve.

The other problem was so much worse. Before water stopped running, water had started coming up on the floor in the kitchen. It seemed to be coming from behind the dishwasher. The first idea was that maybe a pipe was broken behind the dishwasher. Pulling out the dishwasher revealed no problem. They couldn’t find the leak. The leak appeared to be coming up out of the floor itself. They looked around the outside and found a teeny tiny crawl space that they couldn’t enter. They started talking about cutting a hole in the kitchen floor! Or maybe knocking out more block outside to get under the house. Oh my. You know I’m just loving this entire discussion. They were, at this point, still warming up the tank–hurrying it up with a space heater. With the tank unfrozen, they turned the space heater off, leaving the heat tape on, and water was again running to the house.

And water started pouring down from beneath the siding outside the kitchen.

The leak was in the wall, and was coming down the siding and also pouring through under the floor somehow and coming up in the kitchen floor, too. THE PIPES ARE IN THE WALL. This is an old house. They used to do dumb stuff like that. So then they started talking about how they could get to the pipes. Take the entire kitchen apart, removing cabinets and drywall. Or cut out the siding on the outside.

The conversation just got better and better!

They decided they had to get under the house, to make sure of everything they were thinking. They got a hammer and started chipping away at the block in the crawl space opening and chipped out enough for one guy to finally squeeze through with a spotlight and get a look. No additional leaking/burst/broken pipes under there. The leak is in the wall, which is also shooting water back into the house under the floor. (He’s not all the way in there in this photo, but he did finally get all the way in.) 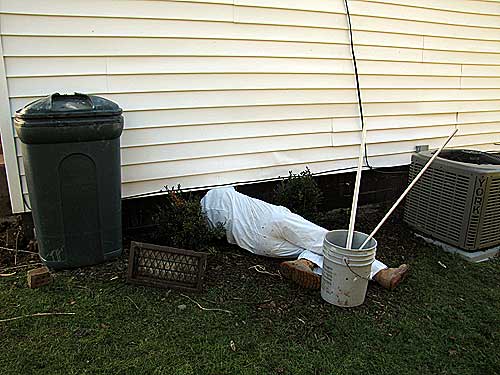 Pipes in an exterior wall are a nightmare because they freeze, which is what happened here. Because it could happen again, and because it’s just insane generally to have pipes in exterior walls where you can’t get to them, and because I don’t want my siding cut up, I’m going to have to get someone out here to bypass the pipes in the wall and replumb the kitchen running the pipes under the house (and insulating them!).

Because of the leak, I can’t run the well pump–it’ll burn up because the leak will make it run all the time.

I’m trying to get someone out here as soon as possible. The guys here this morning can’t do that.

In other words–I HAVE NO WATER.