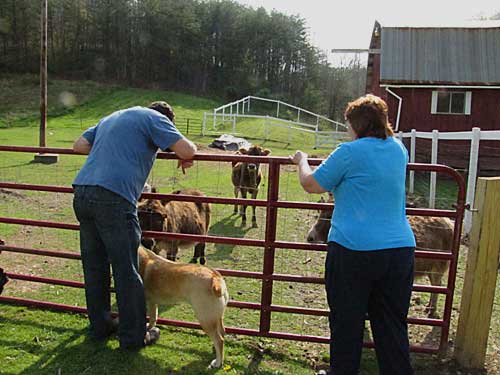 Two (of the three) previous owners were in town and stopped by the farm to visit. So much fun! I was so happy to see them. I hugged them and then ran for a pad of paper and a pen. They walked all around the house and studio gardens telling me what everything is that is coming up! I took them through the house and the studio, to see the changes I’ve made so far (and the big studio renovation) and all about my future plans, and they told me about plans they had had and stories about the farm’s history. It used to be a cattle farm here, way back. I didn’t know that! And a veterinarian lived here just before them, the person who had all the horses (dozens) and she ended up having her horses taken away for neglect.

Now how ironic is that when I am taking in two rescued horses???????!!

Then they borrowed their own rake (that they left here) for the afternoon. I’ll stop by and pick it up on my way back with Morgan from the little store in town where we are going to pick out her saddle. (They still own a commercial building in the area, which they are getting ready to sell, which is why they borrowed the rake. It was kinda funny that they were borrowing their own rake, I thought.)

They ALSO showed me a cistern that is under the house!!!! And where I am SUPPOSED to be plugging a pump in to run it out periodically. WHO KNEW. They told me it’s handy because the water runs out a hose right by the house and they always used it for watering the gardens. Yes, I had (vaguely) noticed a hose there and a plug, but I couldn’t see what it went to and yes, you know me, I hadn’t even thought to ask anyone about it amidst the distraction of so much else going on here.

Off to the little store for horsey stuff. Patriot is coming tomorrow!!!