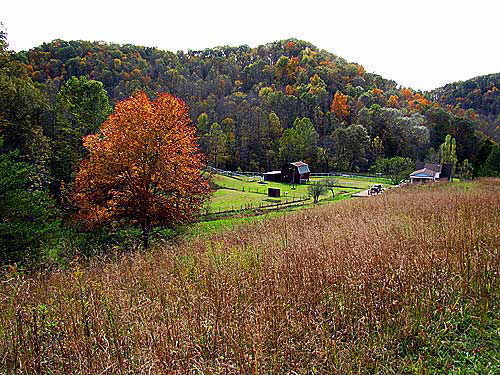 I’ve been driving around a lot of back roads lately taking pictures of pretty fall foliage and coveting pretty fall farms. And barns. I really like this one.

Plus, I want a Twinkie. I’m not sure how the two are related, but maybe it is a comfort thing. For some reason, I thought they had stopped selling Twinkies, but that may be an urban myth. A quick Twinkie google proved the lie. According to Wikipedia:

“Twinkies were invented in River Forest, Illinois in 1930 by James Alexander Dewar, a baker for the Continental Baking Company. Realizing that several machines used to make cream-filled strawberry shortcake sat idle when strawberries were out of season, Dewar conceived a snack cake filled with banana cream, which he dubbed the Twinkie. During World War II, bananas were rationed and the company was forced to switch to vanilla cream. This change proved popular, and banana-cream Twinkies were not widely re-introduced.”

Twinkies, a “golden sponge cake with creamy filling,” are probably made of cardboard, sugar, and petroleum by-products, but I just made that up. I don’t really know.

Then there is the Twinkie defense–a criminal defendant’s claim that some unusual factor (such as allergies, coffee, nicotine, or sugar) diminishes the defendant’s responsibility for the alleged crime.

The makers of Twinkies suggest Twinkies are shelf-stable for as long as 100 years, which is a little bit frightening. Yet good to know! If you suspect an extreme disaster interrupting distribution of goods and services, stock up on Twinkies.

According to CNN, in 2010, a college professor went on a Twinkie diet consisting mainly of Twinkies and lost 27 pounds in two months, so there is that, too. (We don’t know whether or not he died after the experiment.)

And now I need to figure out how to make homemade Twinkies because I don’t think I can bring myself to buy a Twinkie. I found an instructable!