You can always tell when a goat’s been on the porch. 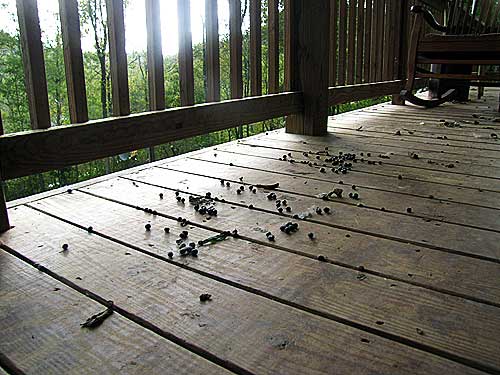 The fence between the garden and the goat yard is kind of hanging by a thread (not too much of an exaggeration) since the fence posts were pulled and the fence pulled aside to shovel all that muck into the garden when the goat yard build-up was graded down. The fence hasn’t been put back in place properly (i.e. fence posts reset) because the grading work isn’t actually done–but it keeps raining. The gate on that side (the gate holding the fence up with no fence posts to secure it) had to be opened to bring Glory Bee through the goat yard yesterday and down to the field for her (BRIEF!) visit. This is a multi-part operation involving first grabbing the bucket of cookies and luring the goats into the goat house to lock them up while the gate is open (meaning the fence is also down). They fall for the cookies every time.

By the time we were bringing Glory Bee through the goat yard, I managed to completely forget that we couldn’t JUST shut the gate again because the whole fence had to be re-propped in its precarious way (which takes more than two seconds). And, because I forgot, I felt sorry for the goats and let them out right away. We had also just brought them a new round bale while they were locked up and they were crying on the goat house porch because they couldn’t get to it.

There is nothing like a brand new round bale.

Except a wide-open garden.

Just as soon as I let them out, I realized I’d made a mistake, but Glory Bee had to be taken down to the meadow bottom and goats don’t really go anywhere anyway, so I headed down the hill while Clover made a beeline for the garden. She’d heard there were some green tomatoes left in there. The other goats headed for the new round bale.

It started pouring rain while we were down there and we had to shelter in the sheep shelter. That is a misnomer because sheep never take shelter. While I was sheltering in the sheepless shelter, I decided that it needed work. Like, some more wood on the sides and maybe a couch. I finally gave up that it would stop raining and kept thinking about how the goats had probably run back into the goat house because goats are shelter-taking people, unlike sheep. So I hiked back up the hill in the pouring rain and locked the goats in the goat house.

Except for Clover, who missed the stampede for shelter at the first drop of rain because she was in the garden. I brought her up to the porch to take shelter with the dogs.

She ate all their dog food, pooped three times, and demanded cookies before it stopped raining, the fence and gate got put up right (or as right as it gets right now), and I could get her back down to the goat yard and let the other goats out of the goat house.

Meanwhile, Glory Bee, whose move was the whole reason behind this entire series of events, jumped the fence in the meadow bottom, came back up, and spent the night in the orchard until I could get her back in the pasture with BP this morning.

I’m not sure why I even got out of bed yesterday!