Today is Morgan’s last day of high school. And for me, it’s also my last day of high school. I’ve been in high school for NINE years!!!! I thought I’d never graduate! I kept getting put back all the way to ninth grade. THREE TIMES. But I’ve finally done it. Whew. And I got mostly A’s. Except on my first try, but that was due to my adoration of cars and girls. Oh, wait, that was Ross. Sometimes I get confused! I think, in fact, that I was never in high school at all! It just feels like it.

Actually, side note, I left high school (me, when I was in school myself) after 10th grade and went on to college. This is probably why I was eventually forced to spend another nine years in high school. I skipped out on half of it earlier in life.

Back to the present. Last night was scholarship awards night at the high school. 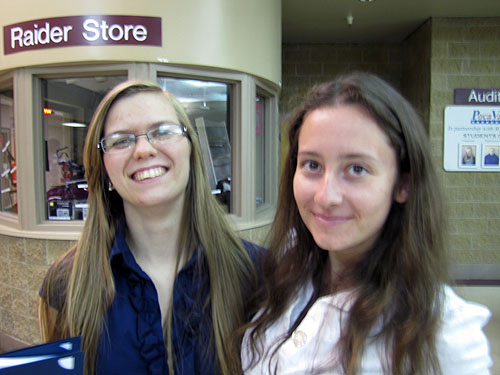 Morgan, left, with my other daughter, Jennie. Morgan has enough scholarships to just almost cover all of her college expenses. We’re very happy! She has grants to cover the gap. My other daughter Jennie is doing great, too, and also has her college covered. Jennie is going to Concord University. We’ll miss her! Morgan is going to West Virginia University in Morgantown. Hey, it’s her town! Of COURSE she must go there.

She was dressed up as Hermione Granger (from Harry Potter) the other day to make a video for her final project in Spanish. It was hot, and she said she couldn’t open her window because a goat might bleat or a rooster might crow or a dog might bark–and mess up her video. It’s hard to be a student on a farm…. And she warned me to NOT INTERRUPT HER. Under any circumstances. Then she took the whole video and realized afterward that she had audio turned off. So she had to do it all over again. She was downstairs, a little miffed, explaining her problem in this picture. She had done it perfectly and there was no audio! 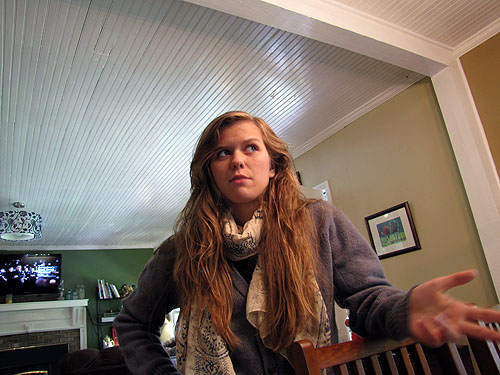 Graduation is Friday and it’s over. No more high school. It’s hard to believe.

In case you want to enjoy a little treat in Spanish, this is Morgan’s Spanish 3 final project. It’s IN Spanish, but it’s fun for the angry cat (played by Buttercup) in the beginning, and if you hang in for the bloopers at the end, they’re great. And yes, she remembered the audio this time.