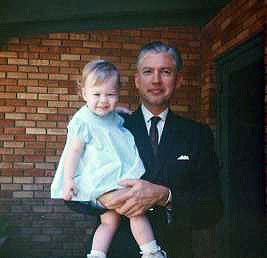 This is my father with me on the front steps of our house in San Antonio when I was but a cute, chubby baby. I’ve been pretty absent here for the past week. I was busy getting ready for workshops, but that doesn’t usually completely take me away from my website. However, last Tuesday I found out that my dad had been put in hospice care, so I’ve been somewhat distracted more than usual. I just want to let you know that I will probably continue to be pretty absent here for a little while longer, though I will try to update more often than once a week, I promise. My dad hasn’t been given nutrients or water for seven days now, only morphine, as per his wishes at this stage. He is 89. He wasn’t particularly sick or anything leading up to this development, which was rather sudden. His body is just done with this world. He’s not aware (or at least doesn’t demonstrate awareness) of people around him at this point, but Morgan–who flew to Texas on Friday night on a one-way ticket–is sitting by his bed every day reading the Bible to him. I will be leaving for Texas myself sometime soon. I’m not sure exactly when yet, or how long I will be gone. Obviously, I have to make some arrangements here for the animals. My father will not live very much longer. Ross (who is named after my father) is out to sea right now, but Weston is here and will also be driving out with me, and we’ll come back with Morgan all together after the funeral.

Just an FYI as to why I’m not around. Thank you for your understanding.