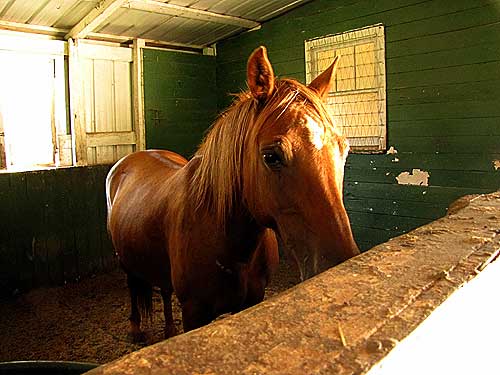 This little shortcake is a Paso Fino cross. She’s a seven-year-old mare who came into rescue bred. She later foaled safely and the colt is already in the adoption process. She’s probably crossed with Quarter or Morgan, but she’s short, like many Pasos, only 13.3 hands. I’ve volunteered to foster her at Sassafras Farm. She’s healthy and back to weight, no longer needing specialized rescue care. She is, in fact, a little on the chubby side at this point and can benefit from being exercised. Fostering her here means the horse rescue can open a stall to a new rescue who needs their care. (If you’re wondering what responsibilities foster care entails, basically it is boarding a horse for free and taking responsibility for their feed and normal farrier etc care, which is one way to help horse rescue.) Shorter horses are harder to place, though I’m not sure why because I love that she’s short. I went to meet her yesterday and climbed right on her back without a block, which was awesome. (Even if I wanted to get on Patriot’s back, I couldn’t do it without a block, even though he’s just over 14 hands. I absolutely have to have a block to get on Zip–she’s over 15 hands.) This little horse is an easy ride and seems to actually know something. Pasos are often used as trail riding horses, and I do intend to ride her while she’s here. I’m slightly less horse-stupid than I used to be, so I could actually test her out to see if she followed directions–turned when I told her to turn, slowed down when I told her to slow down, and stopped when I told her to stop. Just basic stuff, but kinda handy.

This is me riding her at the Hardestys’ farm in Kentucky yesterday. After testing her out in the round pen, I felt comfortable enough with her to take her out into the open field. 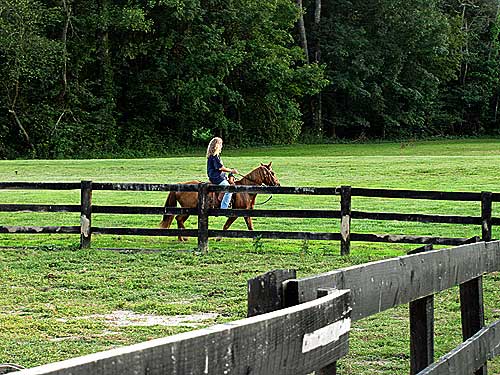 My commitment to the little shortcake is to keep her at Sassafras Farm until she’s adopted. The person who adopts her might even turn out to be me, but Shortcake and I will have to discuss that further under saddle. 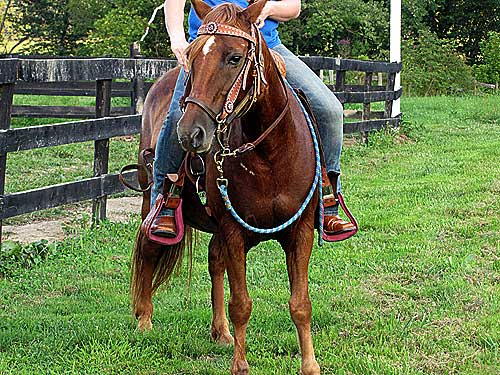