Power went off here not long after I posted yesterday. I was in the studio, making preparations for this Saturday’s workshop day. I didn’t feel any sense of panic or nervousness. I have a generator! And I’ve kept a trickle charger on it to keep the battery charged. Only–

I couldn’t get the generator started. And I couldn’t figure out WHY. I’ve started the generator many times now, and I had just started it this past Saturday when we had a scheduled outage for power line maintenance. I know it works! After about an hour of on-and-off attempts, I started feeling a mild sense of panic due to cold. I called my generator guru, Jerry. (Jerry is my photographer friend who took those wonderful photos of me for my book.) Jerry was in the middle of his own power outage, in the city, in the snow, but he did what he could to give me suggestions over the phone. I tried several different things, which eventually included finding a wrench and taking the panel off the generator. On the upside, I was impressed with myself that I managed this feat, but I never got the generator to start. Jerry kept talking about the choke, which is next to the carburetor, and other things in Chinese. I am not a mechanically-inclined person.

I called my cousin about five billion times, but he didn’t answer, until I started worrying something had happened to Georgia. And everyone was at the hospital! Worry! (Everyone’s fine. Georgia’s fine. Their “power outage phone” rings really softly and they didn’t hear it. They were busy trying to get their own generator going.)

Meanwhile, I tried to find my neighbor, Jim, who actually could come over, but he was bow-hunting.

Meanwhile meanwhile, it was getting pretty darn cold in the house.

Lesson, and a good one before real winter actually gets here. There is no source of heat in this house other than the gas furnace and the fireplace. In my enthusiasm for investing in a generator, power cords, and gas cans, and other associated items, I had neglected the backup. By the time it was getting dark, I was suggesting to Morgan that she find some place else to spend the night because it was going to be cold. I wasn’t going anywhere–I have livestock at the barn. Not leaving them under snow conditions when they are completely dependent on humans for water and food. I lit the oil lamps and settled in for a cold night with my dog and extra blankets. I have a small stash of wood–but it was wet. It was wet because I didn’t take seriously the need for a backup source of heat, enough self-generated heat (without a generator) to sustain minimum comfort until I can get help in the event that the generator doesn’t start for one reason or another. I brought all the wood inside and laid it out to dry, but it wasn’t going to help me right away–it was WET.

I was sitting in the living room, light flickering from the oil lamps, covered with an afghan, preparing myself for the cold night ahead, when I heard a knock at the door. Then Jim opened the door and said, “Show me your generator.”

I was outta that chair in two seconds, grabbing up my charged spotlight, showing him my generator. He showed me the choke and in another two seconds, he had it running. My generator has an auto-choke, but apparently when it gets cold, it needs a little manual assistance. Before a few months ago, I’ve never owned or operated a generator before, so I suppose as times goes on, I will learn more and more. I’m glad for every lesson. I was disappointed that I wasn’t able to start my (push-button!) generator by myself, but so grateful for all the men in my life who educate me on things I don’t know about, like chokes–so that I can do them by myself in the future. Jerry–who spent a great deal of time explaining what I needed to do, but couldn’t get to me to show me, my neighbor Jim–who could get to me, Ross–who set up the new electrical in the furnace closet last summer that allows me to run my gas furnace blower off the generator, and my cousin–who wasn’t available this time, but has fixed my furnace and a lot of other things. I’m not a mechanical person and have never done many things, but I’m learning.

I went to bed toasty-warm with my gas furnace–and discovered that the same circuit that runs the furnace blower also powers my entire bedroom. Nice. (Yes, the main breaker is turned off.)

Today, I powered up the studio and continued with preparations for Saturday’s workshop. I don’t expect that this power outage will run that long, but if it does, I will unplug the house for the day and turn the generator’s full power on the studio. I can energize the entire studio with my generator and the workshop will go on as usual.

Meanwhile meanwhile meanwhile, back at the barn, another lesson. All the animals at the barn at once is a challenge. Only the cows are separated, in the back paddock. I have the barn open to all the rest–goats, donkeys, sheep, horses, dogs. I don’t want a fuss at feeding time in the evening, so this creates a bit of a trick. My concern is between smaller animals and larger animals. I spend a lot of time getting down more hay and bringing fresh water from the creek–this tends to calm everyone who gets excited when I make an appearance. (GOATS.) Then I feed the dogs, who are pretty good at protecting their own interests. Scatter feed for chickens. Then to the goats and sheep and donkeys. Then to the horses. Well. Since I’ve opened the barn up, Shortcake FREAKS OUT when I walk toward her. AS USUAL. I walk by her in the alleyway, and she runs! Freakazoid! This evening, I pointed out to her that, “It’s NOT all about you, Shortcake!” (She doesn’t believe that.)

But boy howdy, when I came with her feed and headed for her stall, she was on me like I thought she might crawl up my back. Excellent! Perfect! I’ve got her number. I feed her in a stall into a bucket that is fastened to the wall, at a height no one can get into but a horse. She is trained!!!! Yay!!! Zip was off trying to eat with the donkeys–not trained. My sweet sugary Shortcake–she’s trained! Every night, she expects her feed in her stall and she will follow my awful self into hell and beyond even though she won’t speak to me any other time. Awesome. Because any time I know I want her in the morning, to go riding, or the farrier is coming, etc, I can just shut the stall door and I’ve got her.

We’ll keep working on the trust issue, but training her to feed is a big step ahead.

Oh–and as you can see, my DSL is working today!

We are melting here. Note how quickly the trees have gone from colorful to bare. 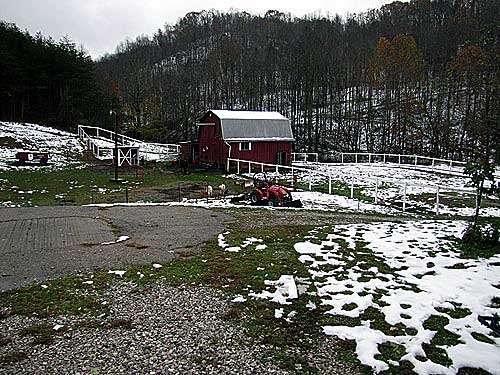 P.S. I will be laying in more wood. LESSON LEARNED.