I played around with the fireplace last night. I haven’t made a real fire in the past year. There were a couple of those fake fire logs stashed in the cabinets that I found after I moved in. I burned them last Christmas, just because they were here. I have some real wood now, so I decided to try it out. I haven’t started a fire since winter before last. I moved here before wood stove season at Stringtown Rising last year, so I missed a year. I had a hard time learning to make fires when I lived there. It was a big accomplishment when I finally started being able to regularly start fires from scratch, and keep them going. I’ve still got it! 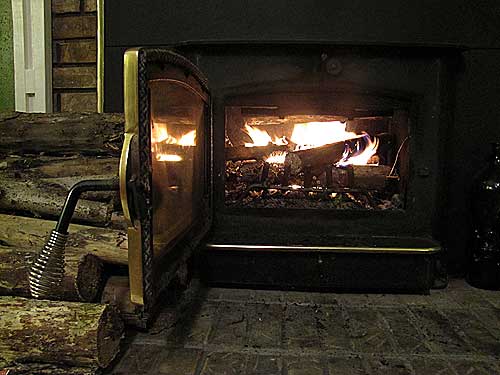 I didn’t have any real kindling, but I grabbed some twigs and dried weedy stuff on the fly out of the gardens around the yard, was real persistent, and made fire. Then I let it die because I really just wanted to go to bed, but I went to bed satisfied.

P.S. I will have the Buck Stove checked out before I remove it. I’m not a fan of it, but I don’t know why it may have been installed, and neither do the previous owners, so it does bear some inspection.