Ross arrived around midnight last night for a quick turnaround trip. While he was here on leave for a month, he talked to a guy who works on diesel engines. His “new” (not brand new, just new to him) truck needs some work. It’s an absolutely gorgeous truck, but it needs the engine rebuilt.

Ross working on his big beautiful truck here last month while he was on leave: 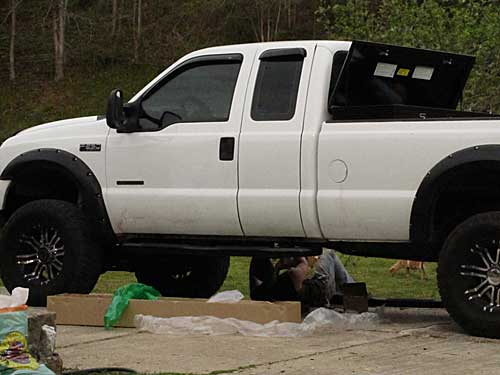 He spent quite a bit of time during his leave prettying the truck up and adding doo-dads. Ross loves vehicle doo-dads, and he loves working on a truck. He’d rebuild the engine himself, but he doesn’t have time right now. He learned everything about working on an engine from his first truck (my new old truck) and then he moved on to a diesel truck for a new challenge. He would like to be a mechanic in his alternate life.

It will take two to three weeks for his truck to be finished–but when Ross will be able to come get it is another question. That depends on his submarine schedule, which he doesn’t know yet. It might be MONTHS before he can come back. Meanwhile, after I drove over with him this morning to drop off the truck and get him back to the farm, he needed another vehicle to get him back to Norfolk. I was in a hurry to get his old truck, which he had signed over to me, repaired and stickered up so he could take it back to Norfolk for the duration. Only–I don’t have the official registration card back in the mail yet, only the DMV registration receipt, and he has to get it stickered on the Navy base when he gets back. Whether or not in this post-9/11 world of tightened security the Navy police would accept a truck registered in another name without a proper registration card is an iffy proposition. I didn’t realize the Navy base sticker issue until he explained this morning. Ross has to get the vehicle onto the base or he has no safe place to leave it if he is called out to sea. Might be fine, might not.

I had an idea.

A challenge for myself, and a sure bet for Ross to get a vehicle on the Navy base because this one has all its documentation in order.

I said, “You can take my Explorer back to Norfolk.”

OHMYGOD. What did I just do? (After all my trouble driving the truck.) And yet it sounded oddly enticing to be left alone with the old truck.

And so Ross gave me a lesson in the old truck, showing me how to shift into reverse, making me practice up and down the road, reversing a few times, chiding me on riding the clutch, and then he took my Explorer and headed for Norfolk. Leaving me with no vehicle in my driveway other than that old truck–for who knows how long. 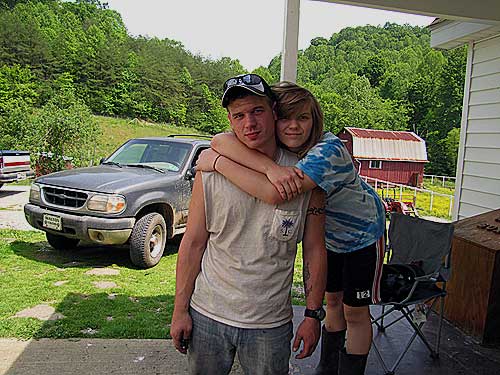 I immediately went to the store to pick up some hot dogs so I could cook out for Morgan tonight, and mostly so I could drive the truck. When I got back in the truck in the parking lot at the store, I had to throw myself on the mercy of a man in the car parked next to me because I couldn’t get it started again.

He said, “Push in the clutch.”

THERE IS SO MUCH TO REMEMBER! But. I will learn! And remember! Because I can’t go anywhere unless I drive that truck.