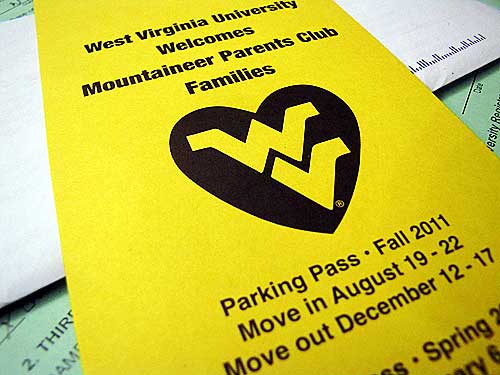 We’re on our way to Morgantown today. Weston’s scheduled move-in time to his West Virginia University dorm is 8:30 to noon Friday morning. Morgantown is about 3 hours or so north from here, so in order to not get up at o’dark-thirty Friday morning, we’re heading to Clarksburg, just south of Morgantown, where we’ll spend the night with friends. From there, we’ll leave first thing Friday morning to easily arrive for the prescribed move-in. It’s a 3-point system where one person must stay with the car and take it to park somewhere else (and hike back!) after off-loading the stuff. Only the student can go inside the dorm to get his room key. Another person must stay at the curb with the stuff while the driver (that would be me) goes off to park (and hike back). We’re bringing Weston’s appendage (i.e. his girlfriend) for the curb service to guard his stuff while he goes inside for the key and while I’m parking.

Or we’re bringing her because she’s his appendage, I’m not sure which.

I’m also not sure how they’re going to endure the torture of two semesters of separation until she joins him at WVU. I’m sure there will be a lot of texting involved.

Anyway, I will update as I can. We’re Morgantown-bound!

I have a kid in the Navy and a kid in college. HOW DID THAT HAPPEN? Next thing you know, Morgan’s going to join the circus.