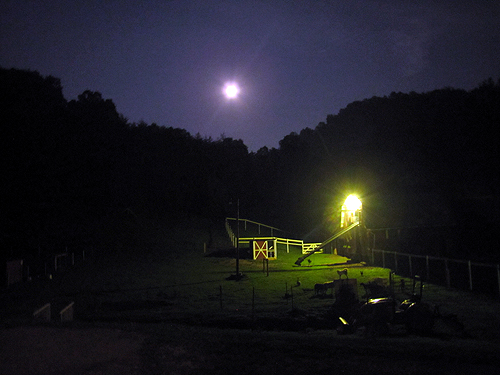 Thursday night (August 2), when Morgan and I were driving home from visiting Shortcake, we noticed the full moon. It was a vibrant moon. When we got home, Morgan investigated and discovered that the full moon in August is known as the Sturgeon Moon. Native Americans believed that the sturgeon of the Great Lakes were most easily caught during the full moon of August.

Further investigation revealed what I believe is the answer to the lunch time trivia on the radio station I listen to when I’m driving. The question was–what happens only a few times per century? (Their questions are always vague like that! Then they narrow it down with clues as people call in to guess.) I wasn’t in the car long enough to hear the answer (which is generally annoying!), but I think I know now.

August is one of those rare months that has two full moons. A full moon occurs once every 29.5 days. This means that there is one full moon every month, only every month but February has at least 30 days in it. This presents the potential for two full moons in a month. This is very rare, of course, occurring once every blue moon.