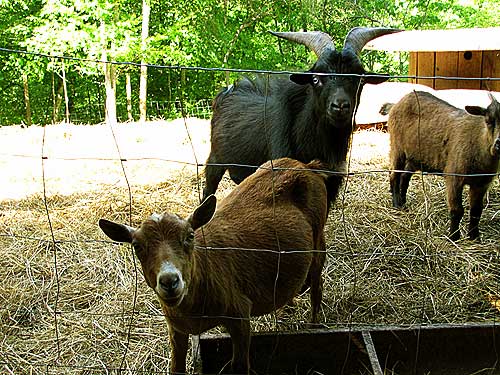 From the further annals of you knew this was coming, Eclipse got into the (nanny) goat yard today.

He doesn’t want to go anywhere else now. He’s fine, thanks. He’s home. 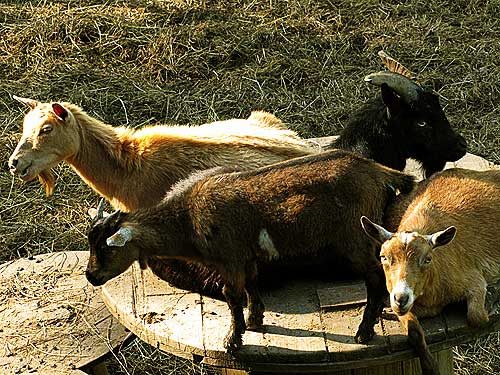 What’s not to love?

I can’t drag him out of there on my own. He’s too strong. (I’m not afraid of him–he’s quite docile, and he’s light enough that I could drag him out, but not if he resists. And he resists.) So, I sacrificed myself by grabbing a package of stale graham crackers and went into the goat yard in a futile attempt to trap Eclipse, and only Eclipse, in the goat house. Then I came back inside and changed my clothes. I was covered in hoof prints. Girl hoof prints. Eclipse was having nothing to do with The Trap.

However, I can now report that even Glory Bee likes graham crackers.

Anyway. I’ll have to await help later this evening. The girls don’t seem to be in heat, so I think it’s okay. We’ll find out in five months. (SIGH.) Apparently, attempts over the weekend to reinforce the duck ‘n’ buck yard were fruitless, though now it’s only Eclipse getting out, not Sailor and Pirate anymore. Short of running electric or investing in battery-operated electric, an intermediary next step we’re going to try is the suggestion (from the comments) about running barbed wire. If that doesn’t work, we’ll have to keep moving on, probably to the battery-operated electric next.

Meanwhile, Eclipse is having a nice evening. You?