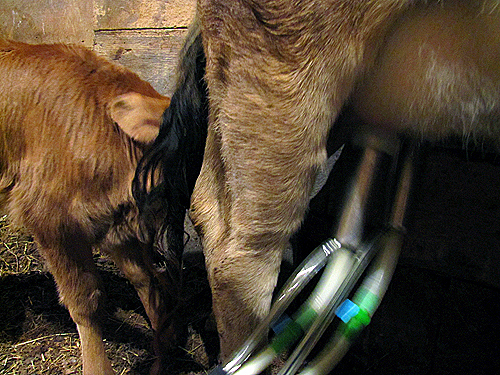 After separating the calf last night, I milked Glory Bee this morning, first good milking and first day to keep milk. Dumplin helped. She was pretty eager. And rowdy. And so was Glory Bee. She was about mooing the barn down this morning, but the calf didn’t break out of the stall and Glory Bee didn’t break in, so the separation went well. You know, for me. I don’t think they thought it went well! I intended to milk three quarters and leave one for the calf, and let the calf have her the rest of the day before separating again tonight, but the calf was so all over the place, I ended up letting her take two since she’d slobbered on them anyway. There was a LOT of kicking and I had to hold the two inflations on Glory Bee the whole time. I think she was letting me know she didn’t appreciate last night’s separation period, but she will get used to it.

I came away with 3/4 gallon, which isn’t bad for two quarters. I would guess Glory Bee will eventually be giving 3 to 4 gallons milk a day, if she was to be milked twice a day (which I won’t be doing), so should be giving 1 1/2 to 2 gallons from one milking. Since I only milked two quarters, 3/4 gallon seems about right and is plenty for me anyway.

So, for the first time in a long, long time, I’ve got fresh milk setting in the fridge to make cream! Butter, here I come.

I AM MILKING GLORY BEE!