At Stringtown Rising Farm, there were two ways to get to a school bus. One way, that I used whenever I could, was to cross the river and drive about a mile to the last stop the school bus made on that road. (And no, you couldn’t get them to come any further for you.) The other way was to drive across the rock-dirt-ice-mud road for two and a half miles to a school bus stop in that direction. Either way, Morgan could get to the high school, but I preferred, when possible (when the river ford was crossable) to go across the river since that was a faster route and I could avoid the rock-dirt-ice-mud road. In the winter, there were times it just wasn’t even accessible for me that way at all. At other times, the river ford wasn’t accessible if water was high or frozen. At those times, Morgan would either miss school, or if I realized bad weather was coming, I could get her to my cousin’s house and she might stay for a week just so she could get to school.

In the winter, often I didn’t drive up and down our driveway for weeks at a time, if not MONTHS. I kept my Explorer at the bottom. This meant that just starting the drive to the school bus was prefaced with a hike down the driveway, which in icy weather sometimes involved slipping and falling. The walk down the driveway in the early morning hours meant walking down in the dark. I’d take a flashlight with me. After she got on the bus, I’d drive back and have to hike back up the driveway. And do it all over again in the afternoon. (At least it would be light.) I always worried about being late to pick her up from the school bus because the school bus stop was in the middle of nowhere. No houses anywhere nearby. Just an intersection where the bus could turn around, totally remote and unpopulated.

It was exhausting, to say the least, and sometimes slightly dangerous.

Sassafras Farm is at the end of a county road. This is nice because it means there’s not much traffic. Beyond the farm, the lovely hard road turns into a rock-dirt-ice-mud road and few people live out there. (It’s a Stringtown Rising Farm sort of road.) This farm is the last stop for mail, the school bus, trash service, etc. (Which is why there are several mail boxes beside my mail box–the people who live down the rock-dirt-ice-mud road beyond this farm have to come up here to get their mail.) Just past the farm is a place where the school bus turns around. First, they pick up Morgan! 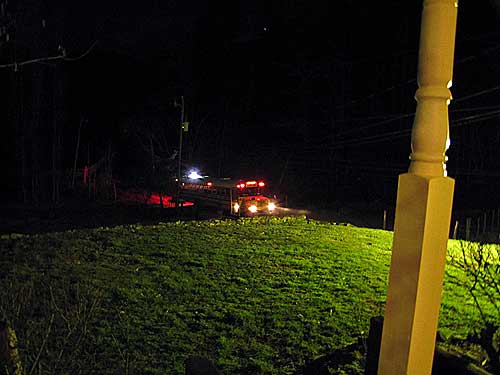 It’s so nice now for her to be able to walk down the short (and not steep!) driveway and get right on the school bus while I watch from the porch.

I’m in love with the school bus! (I’m going to love it even more when it’s snowing and I’m NOT walking down the steep driveway at Stringtown Rising with a flashlight trying not to fall on the ice.)