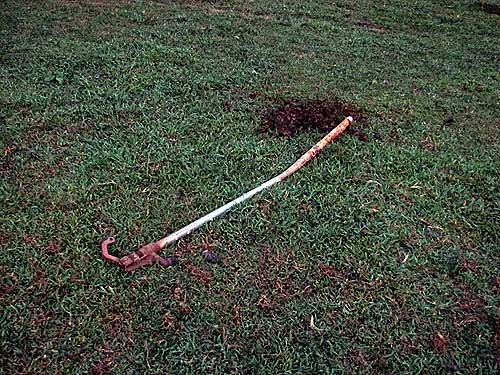 Picking up Morgan after volleyball practice–

Me: “Your horses were very bad today.”

Morgan: “I only have one horse.”

Me: “YOUR horses, apparently, rubbed on the water faucet by the goat yard and knocked it completely out of the ground!”

Morgan: “That had to be YOUR horse, because MY horse has been in the barn yard LOTS of times and that’s never happened, plus YOUR horse is SHORT.”

Short people get no respect!

Me: “My sweet sugary Shortcake would never do such a thing!”

However, she probably did. Whenever my dad was naughty, his grandmother would tell his mother, “He didn’t go to do it.”

There was, however, water running all over the barn yard from the open pipe and it was just all kinds of mess. I turned the water off at the barn and will have it looked at tomorrow, but probably not fixed tomorrow. There’s just all kinds of problems going on here, let me tell ya. I’m going to get hay tomorrow because I decided I was suddenly in a hay emergency. I decided I was in a hay emergency because I decided the hay elevator was a hazard. You know that little goat that likes to run up and slide down the hay elevator? So two days ago, I hear all this hollering from the barn yard. I can’t see anybody in distress. I walk out there, finally figure out it’s That Baby, and there he is, falling down off the other side of the hay elevator, with his foot stuck between the hay elevator and the rail that runs along side of it. Hanging by his foot. I pry him out of there and he limps off like his foot his broken. Only he runs awful fast for a baby with a broken foot. I can’t decide if his foot is broken or not because I can’t catch him. I wait till Morgan comes home and tell her she has to come help me catch that baby so we can decide if his foot is broken or not and what am I going to do with a baby with a broken foot anyway?

Morgan: “Take him to the vet?”

Me: “You don’t take an animal to the vet if you’re planning to butcher them.”

Morgan: “They could euthanize him!”

Me: “That’s called BUTCHERING and you do it at the BUTCHER! And he’s too little to butcher, so what am I going to do? I want MORE THAN TWO GOAT BURGERS OUT OF THE DEAL.”

I don’t really call him That Baby, by the way. His official name is Goat Burger.

So then she helps me catch him and we decide his foot’s not broken. Whew. But then I decide I need to hurry up and get more hay so we can put away the hay elevator.

So I’m getting more hay tomorrow. Or today if you’re reading this on Tuesday. I’ll be back. I have a hay emergency.

P.S. This is all hypothetical, of course. I would never butcher an unwanted male goat. Except when I do. Goat meat is delicious. Don’t tell Clover. Or maybe tell her!!! She has attitude problems!!!

P.P.S. It’s definitely hypothetical about Shortcake destroying the water faucet. My sweet sugary Shortcake would never do that.