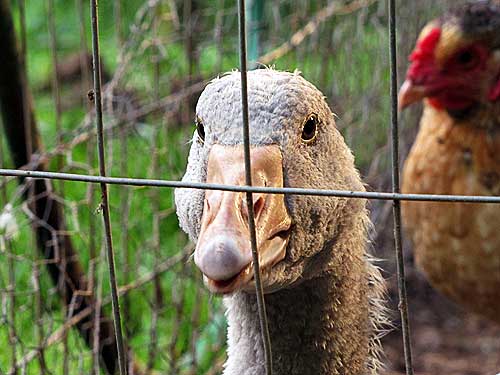 No sooner did I post about our beautiful geese than we had our first predator attack in the chicken house/yard in two years. Two of the American Blues were killed (leaving us the Lavender and one Blue).

Based on the total destruction of one of the geese in which it was clearly pulled piece by piece through chicken wire, I believe it was a raccoon. In the chicken yard, they have an unfortunate tendency to sit themselves right at the fenceline. They do sleep at night in the chicken house, but like the ducks, they go to bed later and get up earlier than the hens. I’m not sure if the attack was last night or early this morning as I’ve been allowing them to go back and forth on their own. It had been so long since we’d had an attack like that, I wasn’t expecting it.

Coincidentally, it was the two who had showed signs of angel wing. Was planning to work on taping them this weekend. Guess I can cross that off my list.

I immediately checked on the ducks in the pond yard and they’re all fine. I think we will move the two remaining geese to the pond this weekend (which I was contemplating doing this weekend anyway–was just waiting for them to mature enough). It’s hard, hard, hard to keep ducks and geese in this area and give them any kind of semi-natural life. Next time I should start with twenty…….