I overestimated when I suggested there might be two people in the audience at the Kickstarter program at the Charleston library. There was one. I think they could use a little promotional help! Anyway. When I arrived, the only person in the room was the library guy. I said, “My job is done!” Then my friend Jerry showed up. And another presenter showed up. And one lady. 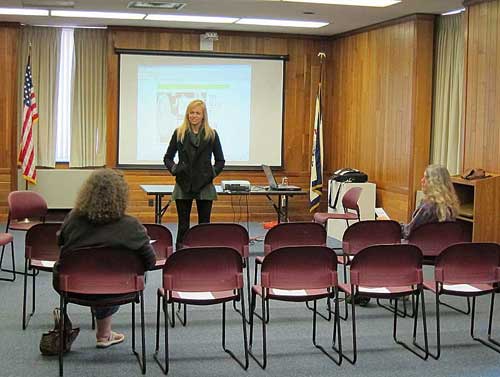 (Photo by Jerry.) That’s the other presenter speaking and the single-person audience–that’s me, seated, to the right. Unfortunately, you can’t see my pants in the photo, but I was wearing some! Though I’m not sure it was necessary. Well, I don’t mean– Never mind! Jerry was on his way somewhere else, so he left after taking this photo. There was supposed to be a third presenter, but even they didn’t show up. The other presenter was in a hurry, on her lunch break or something, so she went first–spoke for about 10 minutes–then she had to leave. I felt so sorry for the library guy, and the one lady in the audience was genuinely interested in starting a Kickstarter campaign for her small business, so I thought to myself, “Suzanne, this is not a waste of time, it’s an opportunity!” Plus, I was really relaxed since, like, nobody was there. So I got up and spoke for about 30 minutes about my farm, my animals, my business, and my Kickstarter campaign, giving all the tips I could think up, answered all the lady’s questions like I had all the time in the world, and everybody had fun. When it was over, the library guy told me how much he appreciated it and that he was really sorry more people hadn’t been there to hear me. And I said, “I have a book coming out next year and I hope the library will buy several copies!” I told him all about my book and said I’d be happy to come back to talk about my book when it was published.

THAT WAS THE LONGEST THREE-FLIGHT ELEVATOR RIDE EVER.

Made it home. And I did not get robbed or beat up. Whew. The city is so scary!