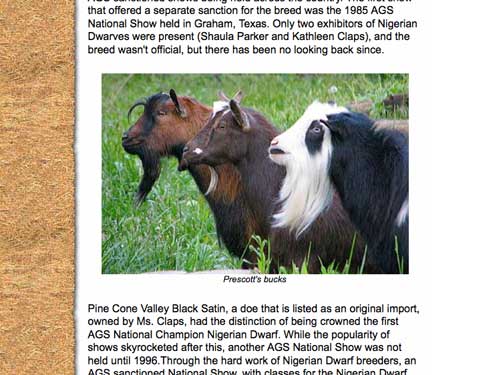 Speaking of people stealing stuff off the internet….. This photo was taken by me in May, 2008. I posted it here. These three bucks belong to Pete and Missy, who are friends of mine. We got our goats from them. I published the photo in my 2009 Chickens in the Road calendar, and also shared the photo with Pete and Missy. They published it with my permission on their website here, crediting the photo to me.

This photo now appears in the November issue of Dairy Goat Journal. It was published in the print edition of their magazine (on page 13) as well as on their website. You can see the photo on their website here in the online edition of the magazine. (They may take it down soon because they WILL be hearing from me–the photo on this post is a screen capture, so there is no running and hiding. Not to mention, it was also published in the print edition, which has been distributed.)

Of course, credit isn’t the only issue. They owe me a fee for use of my work. I think it might be a fairly expensive photo!!!

FYI, Pete and Missy were not interviewed or contacted for the article, though the reference to “Prescott’s bucks” indicates it was taken from their site. They subscribe to Dairy Goat Journal and notified me when they saw the photo.

P.S. Here is the contact page for Dairy Goat Journal if you would like to let them know what you think about internet theft. You can find all their email addresses and phone numbers here:
https://www.dairygoatjournal.com/contactus.html

P.P.S. I’ve tracked down the original article here where it does NOT include my photo. My photo appears to have been added to the article by Dairy Goat Journal.