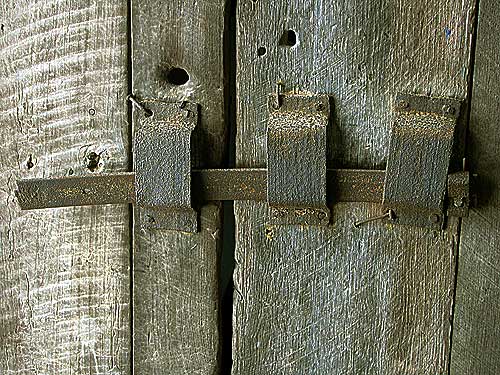 Sometimes there are things I just don’t write about that happen on the farm. Like the hen that I found dead one morning, fallen between the slats on a pallet gate. Or the half-grown chicken that somehow got mashed between the side of the feeder box and the wall of the chicken house. Or the time 52 was working on one of the sheep shelters and a lamb was eating off a bale of hay a few feet away. The lamb walked away from the bale about four or five feet and fell down dead. Fell. Down. Dead. 52 was so shocked, he tried to stand it back up….

One time I was taking a nice little break in the evening sitting in front of the chicken yard watching the ducks and chickens and guineas, and a guinea killed a chicken. Right in front of my eyes. In the blink of an eye. No notice. It was one of those things where you’re blinking your eyes and saying, did that just happen? I’ve never seen anything like it before or since.

It’s true. Animals are sturdy but fragile creatures at the same time. I’ve lost two goats before–Honey, our little wether, and Pepsi, our first Fainting buck. I have no certainty why either one of them died. Sheep can be particularly difficult. A saying about sheep is: As soon as sheep are born, they start looking for a way to die.

I don’t think we have the perfect farming set-up, but I don’t know anyone who does because if you waited till you had it, you’d probably be dead before you could get any animals. We have a pretty good goat house. There is a large dog house inside the goat house. The goats like to climb in there on cold nights. The goat house itself is packed with hay and straw, but they like to snuggle in the dog house for the extra protection. Wherever they sleep, in or out of the dog house, they pack together at night, which is a risk with babies around. Everything is a risk with babies around. Goats, and sheep often go into heat in the fall, which is why there are a lot of winter or early spring lambs and goats. Would I choose to have winter goat babies again? No. But they’re here now. And I can’t tell you how many times I watched, Clover, her two (summer) babies, Mr. Pibb, Nutmeg, Sprite, and Fanta all climb out of the dog house in the morning, which was then in the goat pen. Goats and a dog house are like teenagers and a VW bug. Goats are natural packers. It wasn’t even cold then.

Sometimes I hesitate whether to tell certain stories about life on a farm. There are always people who will second guess and judge, and I don’t really enjoy telling sad stories anyway. But not everything that happens on a farm is sweet. Some of it is sad. And if you care about your animals, it’s hard. And if you have the guts to take it, sometimes you write about it. Sometimes you don’t. Either way, you get up the next day, do the best you can with what you have all over again, and hope nobody dies.