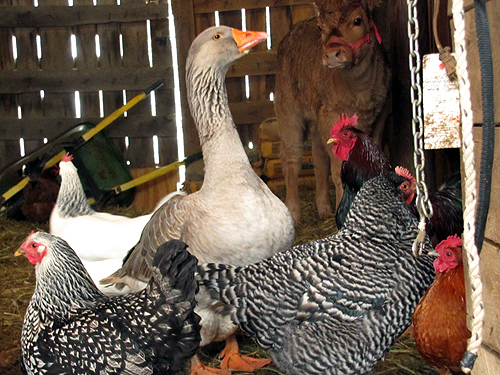 Morgan hates the goose. HATES HIM. No good reason. She thinks he’s scary, but he’s NOT, I swear! I only have the one American Blue male goose. I had three other geese, but they were killed by raccoons before I moved from Stringtown Rising. I had reserved some American Blues for this spring, but the reservation fell through when they didn’t have enough to fill orders. I really really wanted more American Blues, which are hard to find, because they are such nice geese…. I’m not sure what I’m going to do now, but I need more geese. Apparently…..

Me: “Morgan, I have to tell you something about the goose.” Because, like, I had to tell someone.

Morgan: “He’s dead?” (Certain light of anticipation in her eyes.)

Farm children, they grow up so early.

Really. He had sex with a chicken. And I watched it. I don’t know who is a bigger pervert, me or the goose!

A farm, it is so disturbing to the human mind at times…. AND WHO KNOWS WHAT DUMPLIN HAS SEEN.