A few days ago, I wrote about these frowny faces in Gandeeville. I invited speculation. Morgan was keen for answers. To be honest, I’d been driving by these frowny faces every day forever and never noticed them. I was intent on the road and my driving and I’ve driven through Gandeeville a zillion times. Morgan kept telling me about them–right after we passed them. Finally, she remembered to tell me about them before we passed them. Then I brought my camera with me and the next time, I slowed down then stopped and took a few photos. (119 isn’t exactly a real busy highway.) 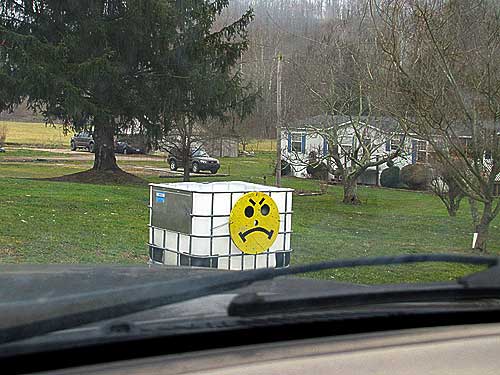 There was a lot of interesting speculation in the comments, and reader Jersey Lady linked up this fun video:

My favorite part of that video is where the guy says, “Let’s get back to Spencer where it’s normal.” You might have to be from around here to think that’s hilarious. By the way, as the video goes through Gandeeville, that’s Peewee’s garage on the left, the junky-looking place. I’ve posted many times about my cousin Mark’s friend Peewee who fixes my car.

Anyway, so THEN. Friend and Charleston photographer and all-around insane person Jerry Waters read my post about the frowny faces and he hopped in his car, went to Gandeeville, stopped neighbors, and solved the mystery!