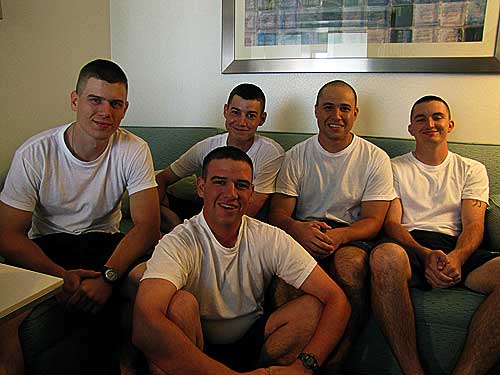 How cute are they?

Yesterday was the last day of Ross’s liberty. He will be taken to the airport, along with his entire division, in the wee hours of Tuesday morning. They will take flights in many different directions to their various schools. Through Navy for Moms, I was able to meet a wonderful group of mothers with sons in Ross’s boot camp division. Boys he’d slept with, showered with, eaten with, run with, studied with, gotten in trouble with, marched with, and endured one of the most arduous and memorable experiences of his life with for the past two months. Sunday afternoon, we got them together at one of the hotels, threw them a party, and let them do something they’ve never done together before–play like kids. Remember Ross who didn’t really want to do anything all weekend? This was one thing he wanted to do.

Me, with “the moms” and our sons (plus a couple “pick ups” whose families weren’t there and had come with some of the boys for the day). 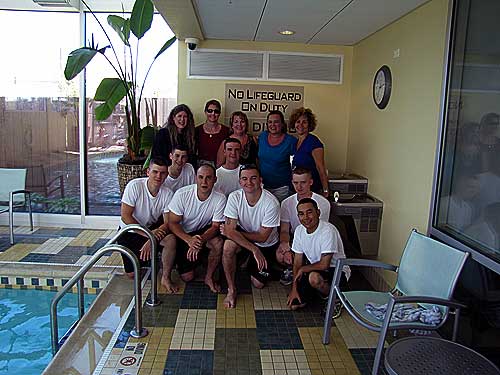 Altogether, I think there were at least nine of the boys from his division there, but it was a come-and-go affair and I never got a photo of everyone at once. I felt as if I knew all the boys from the letters and stories the moms had shared. Over the long weeks of boot camp, we exchanged letters and bits of news and reports from phone calls. I love each and every one of these ladies. It was wonderful to meet them in person.

And the guys? They had a BLAST. (And please note Ross’s adorable dimples in some of these photos. I told you he had dimples!!) There was Chicago-style pizza, hanging out, laughing, telling boot camp stories, and lots and lots of wild horsing around in the pool. After sharing one of life’s most intense experiences, they may never see each other again as they go their separate ways to their individual destinies, but for a few hours, they got to be “just friends” having fun. 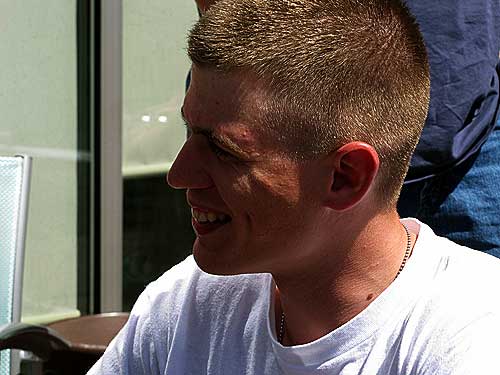 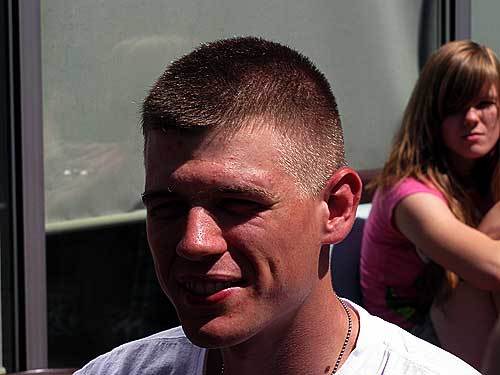 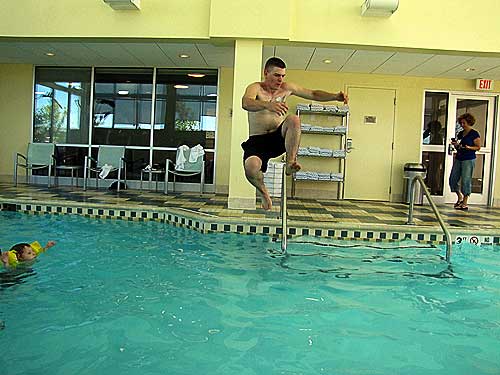 This was the part where I said….. YOU HAVE A TATTOO?! 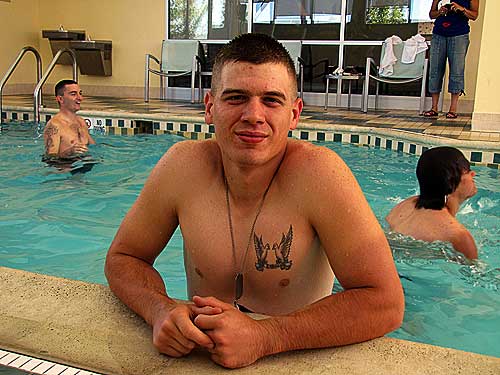 He got it A YEAR AND A HALF AGO. 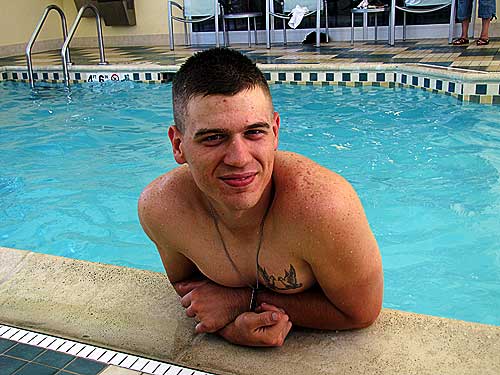 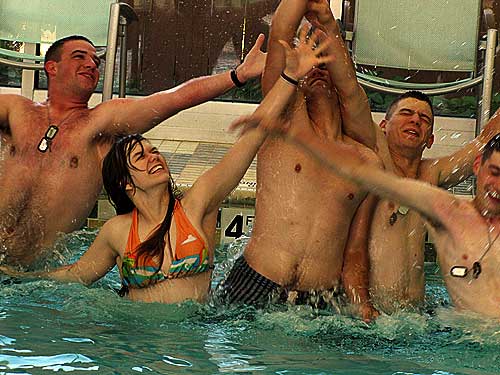 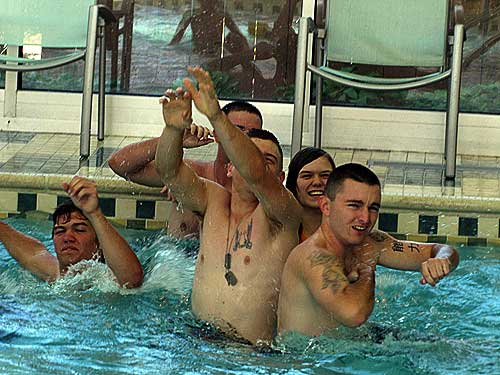 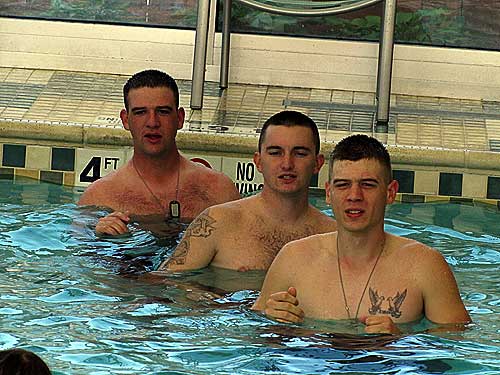 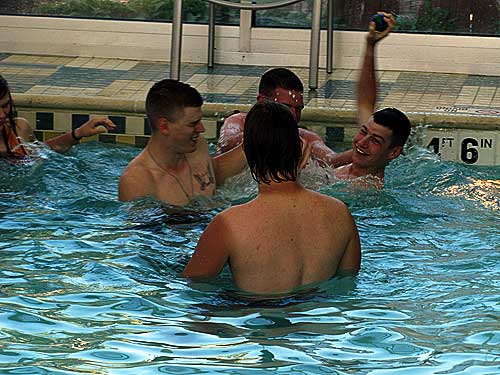 I could go on all day with photos of how much fun these boys had together. They have been under such a state of deprivation for the past two months. Most of them, like Ross, have wanted to do very little other than hang out in their hotel rooms this weekend. To watch them cut loose and play like kids was amazing. Thank you, thank you to the moms of Division 276 who made it happen. 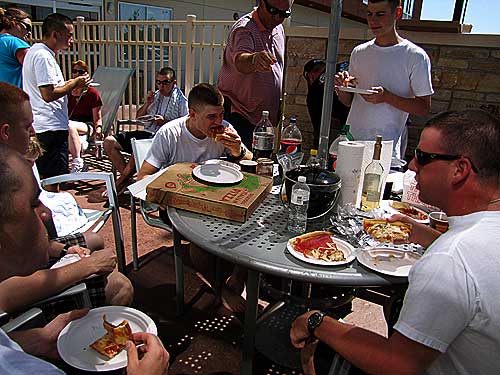 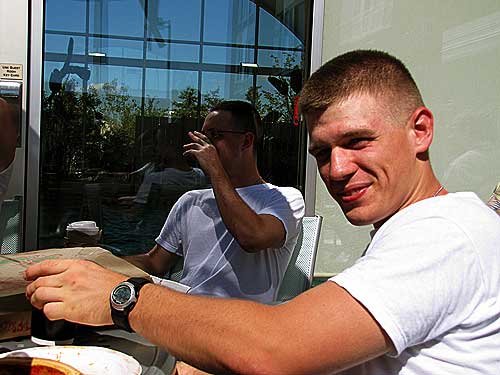 Note that, being in public, they were all wearing regulation Navy attire, white t-shirts and PT shorts (as swim trunks).

At the end of the afternoon, their weekend of liberty was over and it was time to take them back to the base. It was heartbreaking. My big, competent, grown-up, graduated sailor who’d endured and surpassed every challenge broke down in tears as soon as we got in the car to drive to the base. He didn’t want the weekend to end. He didn’t want us to leave. He said, “I don’t want to go back.” He cried, we cried, and one of his contacts fell out to give us all a moment of panic-laughter-panic. (He’s not even supposed to be wearing contacts while he’s still at boot camp, but he begged me to bring them.) Then we all cried some more and he finally had to leave. We sat in the parking lot, watching him walk away. I had bought Morgan a sailor hat (the white dixie cup) at the NEX because she loved Ross’s hat so much and she sat in the back seat wearing her sailor hat and crying. Weston, who had done nothing but complain all weekend because we didn’t “do anything” said, “That was a really good weekend.” And then we had to give up and drive away because we couldn’t see him anymore.

As I set this post, it is very, very early Monday morning and we are in Lafayette, Indiana at the same hotel where we stayed on the way up, three hours south of Great Lakes. Today we will drive nine more hours to get home.

Clover and the chickens are waiting for me………