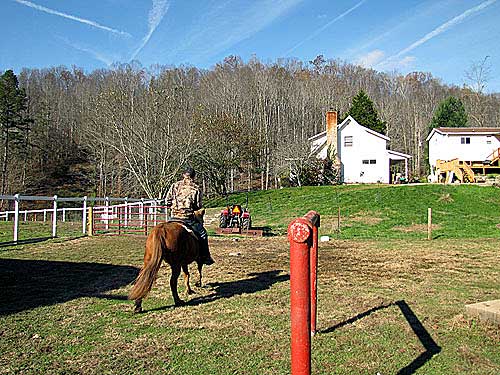 Ross was determined to ride a horse today. He’s been wanting to ride a horse since we got horses, but not until Shortcake was there one that I felt comfortable entrusting with a first-time rider. Ross has never been on a horse before in his life. I saddled up Shortcake, gave Ross directions about how to make her go, how to make her stop, and how to guide her left or right–and let him get on. I’m not quite sure all my directions sank in.

But at least I know that with my sweet sugary Shortcake, the worst that’s going to happen is she’ll take advantage of the novice and walk herself back to the barn!

Re Ross’s tales undersea during the hurricane–his submarine, the U.S.S. Scranton, was scheduled to participate in “war games” with the U.S.S. Montpelier. Shortly before they were to leave, the Montpelier was involved in this incident in which they surfaced into a cruiser. Wow. That’s not supposed to happen. Anyway, so those exercises were cancelled. Instead, they headed to Lake Michigan, through the Erie Canal, for some torpedo exercises. This was also cancelled and they were sent back to the Atlantic. He said, by the way, that it was very cold in Lake Michigan. They know this because the sea water around them operates the cooling system on the submarine. They have no heat–heat is what’s called turning off the air conditioning. So it was either really cold or miserably hot when they were in Lake Michigan–because the water there is really cold. Once back in the Atlantic, they went down deep to ride out the hurricane. So, 18 days later, he said, they returned to port, having pretty much done nothing. I said, “It’s not just a job! It’s an adventure!”