If you’ve never seen square bales coming out of a baler, here’s a quick little video. It’s oddly addicting to watch the hay eaten in on one end then pooped out the other. This is how square bales are made:

That’s Sam’s voice in the video. Sam is the hay man’s brother. My hay man is Roger. He’s retired, so he’s “the hay man” available full-time for customers. Sam works as a mechanic by day and also drives a school bus. He runs the baler. Their family owns hundreds of acres across the Walton area in Roane County where they hay. 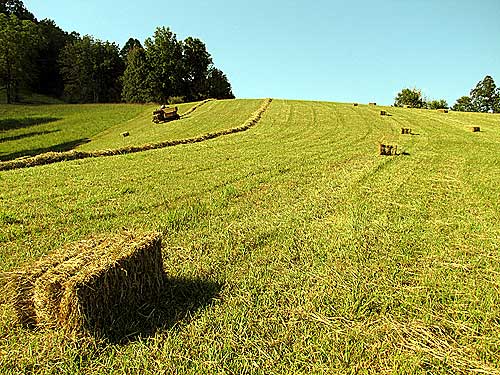 That’s Roger driving the tractor, and that’s me riding high with the best seat in town–on top of the hay. 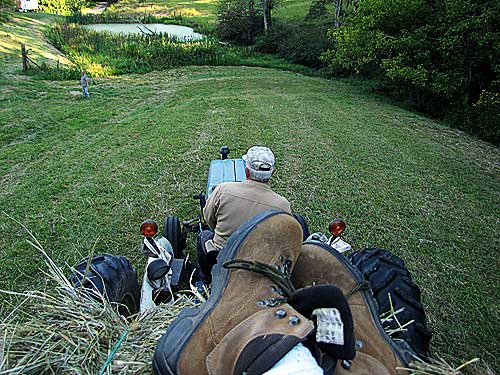 That’s Adam on the left and Adam’s dad, Gary, on the right. 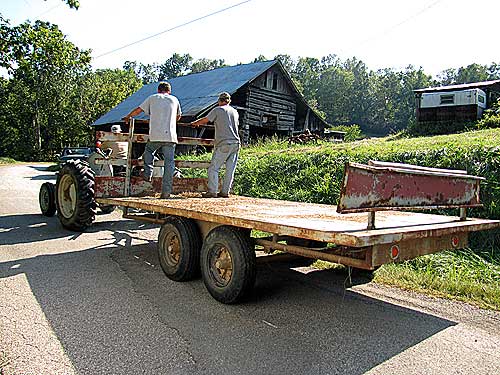 They came with me to get my last two truckloads of hay out of the field. It’s a little cheaper out of the field if you can coordinate help on the day they’re baling. (Not always easy.) It’s $2.50 out of the barn, $2.00 out of the field. Roger agreed to pull his trailer and let us bring the hay down and pack the trucks at the barn, which was mighty nice of him since it’s hard to pack hay on trucks to your best advantage on sloped fields. He doesn’t usually do that, but I bring him sausage biscuits. 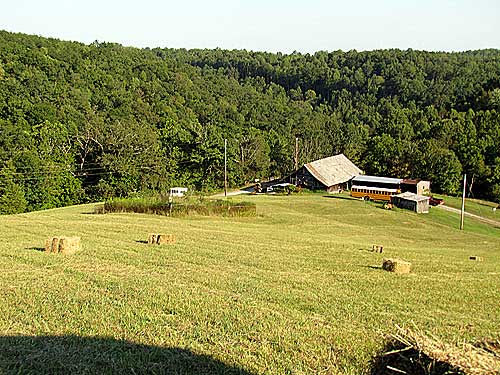 It was beautiful out there. I love hay fields. I’m not a good loader person. I have a hard time heaving bales up onto trailers or trucks. I’m an unloader and I love that job. It’s basically a “kid’s” job, but I’m glad I can at least do that. I love climbing into the back of a truck and clambering up on bales and moving bales down to the drop zone where the men carry and stack. I’m almost sorry when it’s over because I want to do it more. 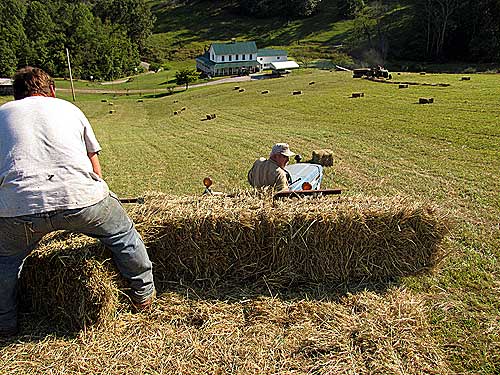 My truck being loaded from the trailer: 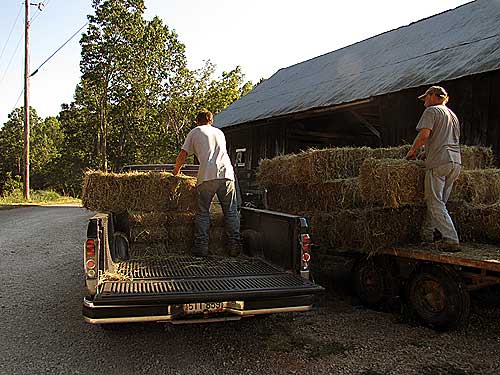 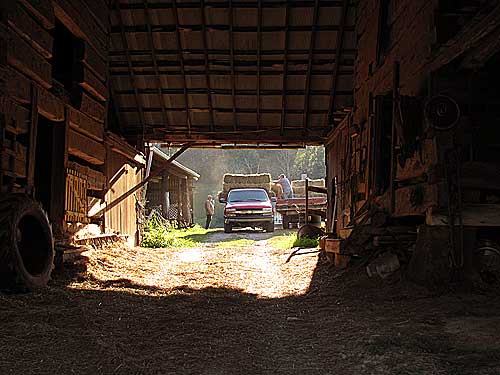 I’ve got all my hay in now. (This final haul was a few days ago, but I wasn’t able to post due to my internet outage.) I’ve got around 675-680 bales in the barn–500 in the loft and the rest downstairs in two areas. Having a farm on my own, I spend a lot of time around men, mostly farming men. They’re always entertaining. I love farm men. The conversation in the hay field that day came around to round bales as the ruination of modern society. In the olden days, young people worked in the fields all summer loading and unloading hay bales. Today, round bales are popular and they’re handled by equipment, which is why so many kids today don’t know how to work. There you go, now you know. Roger and his brother only make square bales, and they have trouble finding kids to work in the field. I took home 104 bales that day, but Roger drove us around longer than that and Adam and his dad picked up more bales than I was taking home, which was fine with me to help Roger as repayment for my hay ride–and I pay hired men by the hour, so they don’t lose out whether they’re picking the hay up for me or just helping me be my hay man’s favorite customer.

No more hay rides till next year. (Well, except I will have hay rides here at Sassafras Farm, in my new old hay wagon, at the Party on the Farm on September 16. Are you coming? Get the info and sign up here.) Haying is over for me this year. But I can always go stand in the barn and sniff…..