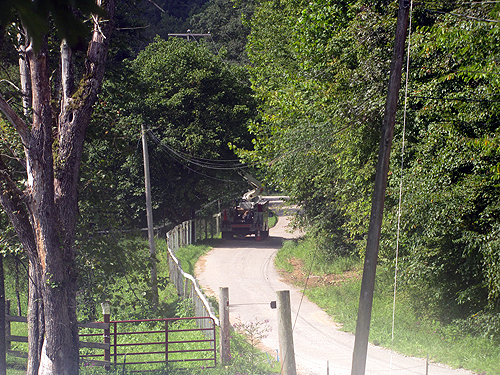 Whew. We have Frontier DSL internet and phone service here at the farm. In the country in West Virginia, you’re lucky if you can at least get DSL, so I mostly try to not complain since it’s so much better than the only other alternative, which is satellite. I had satellite for years and it was expensive and worse. Anyway, the DSL and phone both went out and stayed out for an entire week. I called (using my spotty cell service) Frontier every day like clockwork. I talked to many very nice Frontier people. They always told me that a crew was coming! It would be fixed tomorrow! And they were making notes on the ticket in the computer! I ended every call, after a few days, the same way. “You know that movie Groundhog Day where the guy wakes up every day and it’s like the day before never happened and he has to live it all over again? That’s what this phone call is like. I’m going to get up tomorrow, make this phone call, and it’s going to be like the phone call the day before never happened!”

Pictured above, see the Frontier truck fixing a corroded connection on the pole in front of the farm. He came up to the house and said, “That was an easy fix.”

It only took him about 30 minutes! Yet it took them a week to get out here! Five minutes after he left, the internet went out again, then was back, then out, and was very random and sporadic for several days. Today is the first day that it has come on and stayed on.

Keep your fingers crossed for me!