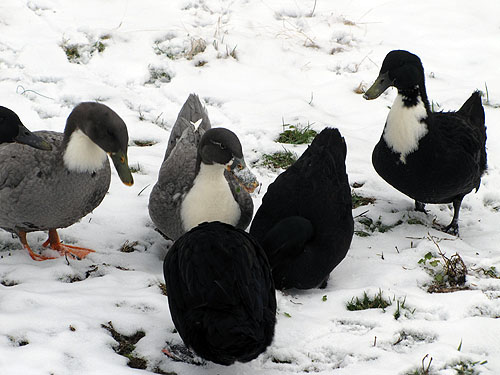 These are some of the newer Blue Swedish ducklings (all grown up!) that I got a few months ago, along with the Black Swedish and Cayugas. This picture is from last week when we had around 3 inches of snow followed by a few days of single digit and teens temperatures. Then it was nearly 70 degrees. Then it was 40. And now it’s back to 50s and 60s, supposedly for the rest of the month. What is that about??? I’m not complaining, but this is not looking like the bad winter we were supposed to be in for. Of course, we haven’t had February yet, so maybe Winter is taunting us… The grass and the trees aren’t going to know what to do!

Meanwhile, finally recovering after the mad rush of Christmas on Etsy, and finding my way into a routine. My best shipping days (for baked goods and 1-3 day priority mail) are Mondays, Tuesdays, and Wednesdays, which gives me more “free” (ha) time in the second half of the week to work on other projects and get back into writing. (Just a head’s up to those of you checking in that I’ll be around more here the second half of weeks than the first.) This is a weird Monday–speaking of weird–because it’s a Monday holiday. No shipping today.

A couple notes to respond to questions: One, Precious is fine! And Pepper is a girl, FYI. I put a dress on her this week to help her feel more girly after so many people thought she was a boy! Also, update on the kids for those of you who asked–Weston is at Fort Bragg in North Carolina, over halfway through his stint in the Army. Ross is halfway through his first year in Morgantown at WVU, and Morgan is still at WVU. They’re all doing really well, and it was nice to have them all here at Thanksgiving, though Weston couldn’t come back for Christmas since he only had Thanksgiving leave.

Cows are bred, I think/hope, and new little layer hens are growing and in the big chicken house with the big chickens. The ducks are quacking in the non-stop puddles from all this rain, and the goats are mostly staying behind their fences. And I’m BAKING! A LOT!

How is your winter weather? Weird or as expected? I can’t figure out this winter.