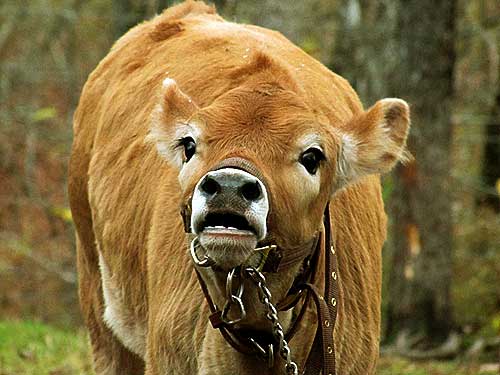 I have no idea what I’m doing.

Here are the problems:
1) She’s wild. I can’t control her.
2) She’s bumping BP’s udder so hard, she’s hurting her.

If it weren’t for #2, I’d be tempted to just put her back with BP, let her be wild another month or two (I mean, she’s wild already, what’s another month or two), then catch her and go through what I’m going through now (albeit with an even larger calf). As it is, BP’s sore is healing (there’s a big scab on it now), and if I put Glory Bee back with her, BP is going to end up with a bloody udder and maybe mastitis. Is this normal for a two-month-old calf to be that hard on its mother? Is Glory Bee bigger and stronger because she’s half Brown Swiss? I understand that beef calves are often left with their mothers for six months, but protecting a beef cow’s udder isn’t on the same level of critical as protecting a dairy cow’s udder.

I didn’t really want to start milking BP twice a day already, nor did I want to take Glory Bee away from her this early, but I’m afraid to put Glory Bee back with her. I can’t stop Glory Bee from hitting her udder so hard.

So that takes me back to what to do with Glory Bee. Thank you so much for all the comments with advice! Sometimes it’s confusing because the suggestions are wide-ranging and sometimes opposing, but I need to hear it all. I’ve tried to look at what seems to be the most common advice combined with what I’m capable of doing in our current set-up. I can’t do a whole lot about changing our set-up at the moment, and I also can’t take back the mistake of not getting Glory Bee to take a bottle or drink from a bucket earlier. I can’t seem to get her to take milk from me now. One suggestion was to mix it with calf starter to make a sort of mash, and I’m going to try that today. She does love the calf starter and eats it eagerly. She also eats hay, and will drink water from a bucket.

Today, we got her tied out to a tree again, differently so that hopefully she can’t break away from the rope. She’s tied shorter, and tied high. Though she did have enough rope to walk around the tree so she’s kinda tied low now even though she was tied high. (Sigh. This is a work in progress.) She’s right out in front of the house so I can check on her frequently. 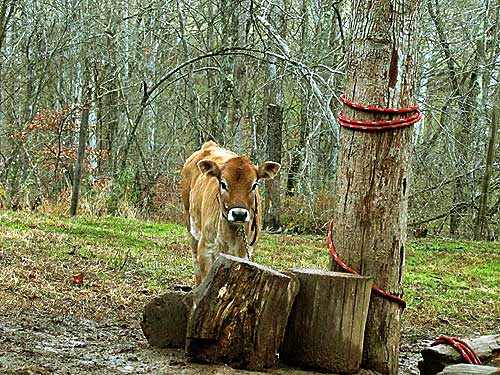 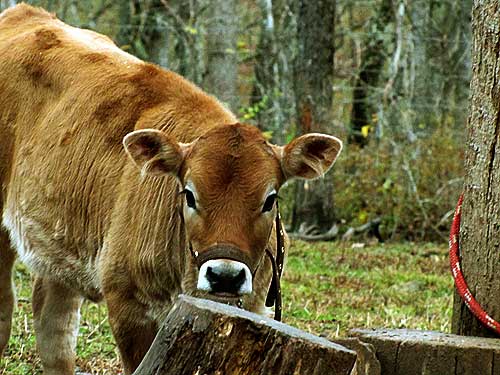 I’m going to bring her food and water, and sit with her, then take it away. Rinse and repeat throughout the day so that she sees me as her food source.

More suggestions? Have I mentioned I don’t know what I’m doing?

Goal: I want a docile milk cow who can be walked when needed and who will come to me rather than run away.

I’m trying to get the darling 4-H’er, Amanda, to come over this weekend or sometime early next week to give me some tips on how she works with her calves. (Amanda? AMANDA!)