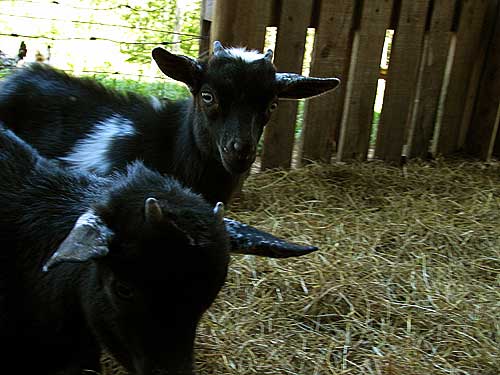 Okay, so that’s not really a decision. We don’t disbud. Been there, done that, don’t want the t-shirt anymore. Clover’s babies are getting their itty bitty horns and we aren’t disbudding. Disbudding is done with a hot iron. You can see more about disbudding in a previous post here, back when we first got Clover and her first two babies.

After that, Honey’s horns (which were being disbudded for the second time in that post), grew back again. Nutmeg has horns, too, though they are flat and misshapen and hidden under her coat. Many times a goat’s horns will grow back to some degree, whether minimal (as with Nutmeg) or to a greater extent. If they’ve been disbudded before growing back, they grow back misshapen.

Not all breeds of goats are traditionally disbudded. Nigerian Dwarf goats, such as Clover and her babies, are. I used to feel very leery of horns–till I had some animals that have horns, such as the Jacob sheep and the Fainting goats. (Not all Fainting goats have horns, but some do, such as Mr. Pibb. Fanta and Sprite are polled–they don’t have horns naturally.)

I’ve gotten used to horns. I don’t see them as dangerous as I did originally. I also see them as handy at times. Need to catch an animal? If they have horns, you have a handle to grab onto. And I don’t see them getting their horns caught in the fence as a problem.

And disbudding is hard to do, and do right. And I don’t like it.

I’m not sure if this makes us rebels or not, but it just feels right.