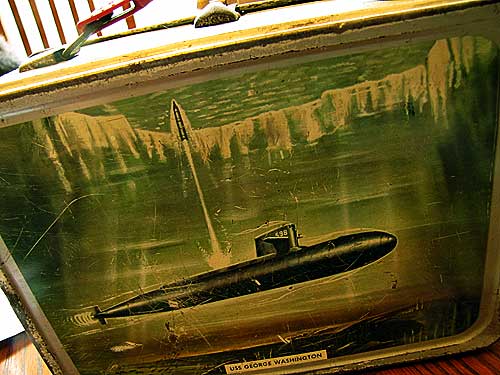 A vintage U.S. Navy lunch box, given to Ross by a friend of ours after he enlisted last fall.

Sometimes I send Ross silly stuff in my letters, like one time I sent him a letter and had all the animals send him a message. Clover’s message was: “Ross who?” In another letter, I sent him this top 10 list.

10. All the money you’re making! $1.80 an hour!
9. All the money you’re saving! No gas, no girlfriend, no fast food.
8. You can’t get in trouble! No drinking!
7. Think how buff you’ll be by PIR!
6. Who doesn’t need to know how to make a flotation device in 3 seconds out of a set of coveralls while you’re wearing them?
5. You’re no longer addicted to your cell phone!
4. You know how to write letters now!
3. You’re qualified to shine shoes in airports nation-wide!
2. Free shots in the butt!
And the number one best thing about boot camp–
1. All that marching!

P.S. Thank you for asking about sending letters to the boys who don’t get mail. I inquired about it on the Navy site and was told they won’t deliver mail addressed to “Any Recruit” and at this point, due to the delays in sending and receiving mail, it would be too late to set something up with Ross like that because he will be finished in just a few weeks now. (By the time he and I could write back and forth about it, it’ll be graduation.) I do believe there are ways to send mail to Any Soldier or Any Sailor (post boot camp) but I don’t know anything about that at this time and haven’t had time to check into it. (Maybe somebody here has more information than I have, so feel free to leave a comment with info if you do!)

P.P.S. Thank you! I just added the Any Sailor logo to my sidebar. You can click on that and it will also take you to Any Soldier.