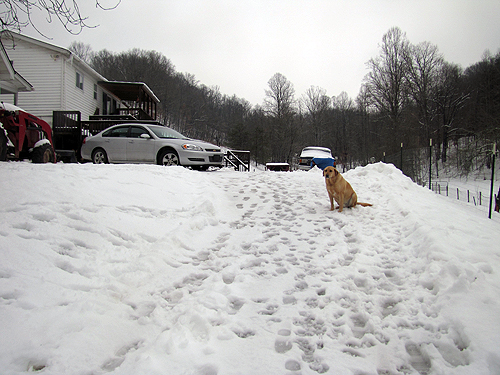 Dog tracks and people tracks. You don’t see any car tracks, do you? I managed to move my car back a little yesterday, so that at least it wasn’t in the middle of the driveway at the top, but that’s as far as it went before it got stuck again. My car said NO. It had been over a week since I’d been out of here, so I called my neighbor. He was running to town to pick up his daughter from work. Handily, she works at a grocery store! So I hitched a ride with him to the store and was able to re-stock a few things and see, you know, THE WORLD.

He couldn’t get his four-wheel drive truck up my driveway, so I didn’t feel so bad about not being able to move my car!