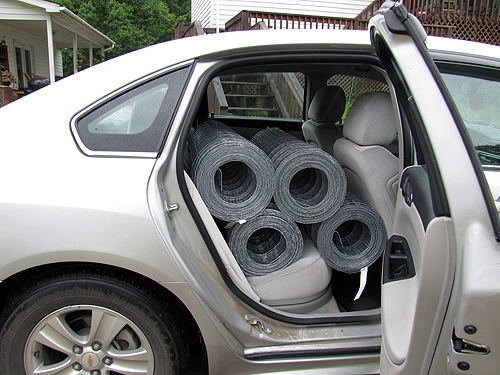 Look at what else I can get in my Impala! That’s 200 feet of fencing. I had already bought all the fence wire in the size I wanted from the little store and had to go to the city. I was loading this fencing into my car by myself, and feeling pretty proud of myself though it was heavy, when three men parked a pickup next to me, got out, and asked if I wanted help. I told them I wouldn’t turn it down. But then I knew I was going to get home and have to unload it all by myself, so why wear myself out unnecessarily.

Then I stopped at a feed store in the city for fencing staples. I couldn’t find them, but I did find a lady who worked there. I asked her for the fencing staples. She told me they were in a bin in a back room. She spoke in a German accent and waved her arms like Vanna White then swept me off to the back room calling me dear and darling all the way. I felt like I was in the magic castle! Or in the middle of a dream. It was very strange.

Then Robbie and Rodney came over to start on my big fencing project. 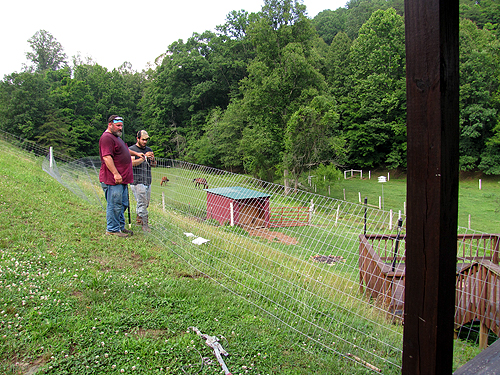 This is a big hillside off the studio that has to be weedeated. Down below, there is a good bit of yard out past the driveway and along the creek that has to be mowed, and it’s difficult mowing in some areas. 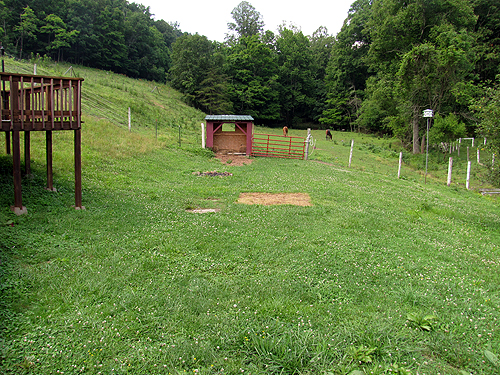 I wanted the fencing to start at the top of the hillside, but unfortunately they spent a couple hours last night figuring out that it was nothing but rock rock rock up there and a fence line where they could put posts would look like a drunk person put it up.

The fencing is going to have to start at the bottom of the hillside. But at least it’s starting! I have another section between the access roads that will also be fenced, and I’m planning to cut the mowing job here by a good third.

You know, since I’m the one doing the mowing now!