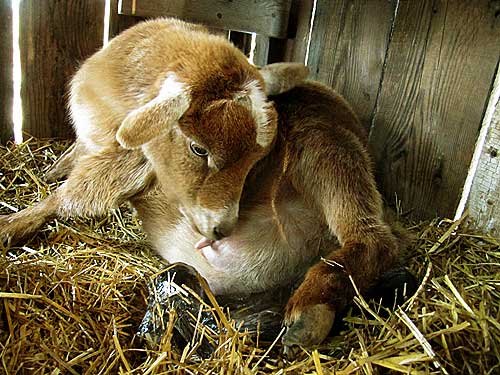 A two-and-a-half-year-old Nigerian Dwarf doe named Nutmeg gave birth to a kid late Sunday on a farm in Roane County. Based on her girth, Nutmeg, known on the streets as Rotunda, is believed to have been pregnant for nearly two years, and was expected to deliver ten or twelve kids. Sources close to the goat suggested the mythical ballooning of her figure was all a ploy for sympathy and treats. The rumored father, Mr. Pibb, was seen passing out cookie cigars. Clover, a family spokesperson, stated that she was told by an unnamed Woman that the kid was a girl.

“The Woman isn’t known for identifying sex correctly,” stated Clover. “I wouldn’t depend on her.”

She kicked another goat who called her grandma and made off with the remaining cookie cigars.

Nutmeg, who at presstime was resting peacefully in the goat house nursery with her kid, had no comment on the accusations involving the ballooning of her figure or the behavior of her mother.

More pictures and VIDEO OF THE BIRTH tomorrow!