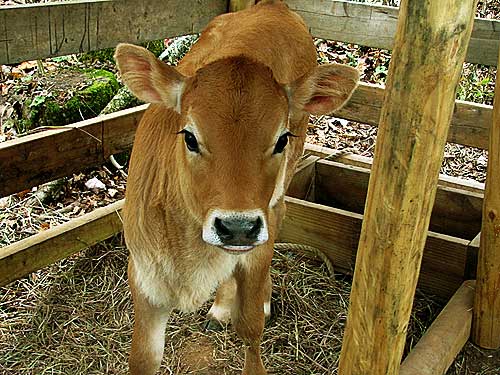 Several people asked about the rope and the halter (with chains). Halters have chains where the lead can be attached, and the chains cinch up around their jaw, helping to keep them from getting out of the halter when you’re leading them. We used a rope on her to capture her in the first place! Even once we got her cornered, we had to tie her before we could put the halter on her. Catching a calf that hasn’t been broken is pretty much like capturing a wild animal. We ended up leaving the rope on her because we discovered the halter didn’t fit. It’s too big. Even after punching another hole to tighten it up, it’s still too big. Not sure what we’re gonna do about that. It was the only size calf halter at the store…. In any case, after we got her penned the second time, we took both the halter and the rope off her. We’re keeping her penned in the milk stand shed for now, until she tames down some. When I bring BP in to be milked, I let the baby nurse her, too, and she also has water and feed and hay in the pen.

This morning, I got a gallon and a half, and that was only milking BP’s front quarters. When I was done, I let the baby milk her out in the back.

I’ll have all the photos and details of how we caught her (twice!) tomorrow, but I wanted to share this little video of Glory Bee. The first bit is just before we put her in the pen (the second time). No more escapes! The second bit is Glory Bee having her say, and she’s not happy! She’s pretty quiet–we’ve hardly heard her moo since she was born, but you can hear her mooing mad here.

The last bit is Beulah Petunia having dinner with the chickens yesterday evening when I fed her outside the pen (which is not usual, but I was afraid to let her into the milk stand last night for fear the wild calf would try to make a break for it).

Glory Bee was pretty calm this morning when I let BP in for milking and feeding, so I think things are on the upswing…. (Crossing fingers.) This afternoon, I’m going to start feeding her treats. I’ve been petting her a lot. She is tolerating me. Barely.