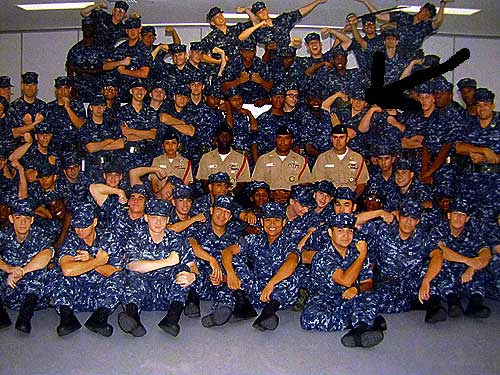 This photo of Ross’s boot camp division was taken a couple of weeks prior to graduation. They look like they’re having an awfully good time, don’t they? They must have been having more fun in boot camp than they let on. These relatively new Navy daily work uniforms are called digital blue camos. I think they’re cool.

Okay, here’s the serious shot in their formal uniforms, the dress whites. 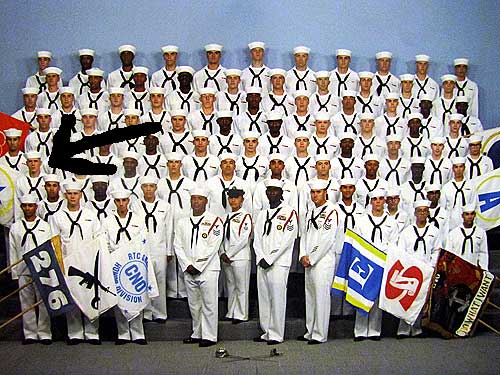 A number of people have asked me how Ross is doing. (If you’re new here and don’t know what I’m talking about, see here.) Ross is now in Goose Creek, South Carolina (outside Charleston) where he will be spending two years in nuclear power school, training for service aboard a nuclear submarine. After boot camp, he spent a couple of weeks doing yard work (er, grounds maintenance) while waiting for his school to start. Once school started, he became a very busy boy. The other day, Ross told me, “You know that math in school you know you’ll never use? I’M USING IT.”

Here’s a sample of his life in Navy nuke school, in Ross’s own words: “Work work and more work. I took Friday afternoon off to go out to town with a couple guys. Thursday night we had so much homework, I spent 6 hours after class working on it, I worked on it till midnight (they force you to leave the building at midnight) and it still wasn’t finished so I slept for about 3 or 4 hours (the night before I didn’t get much sleep either because I had the midnight watch) and went back at 5 to try to finish but I still didn’t get it finished before class started. I went down to the instructor’s office and waited for him to get there and told him why I didn’t finish and how long I worked on it (I wasn’t the only one) and he said don’t worry about it. After he graded a few, he came into the class and said that the homework looked horrible and we were all going to redo it, mine wasn’t even graded, so I have to do that work again and he gave us 2 weekend review packs (weekend review packs are also really long) and I have a weekend review pack to do for math. I have a BE test Tuesday, PFA Wednesday, final math test Thursday, and inspection Friday. If I pass all of those I phase up Friday. On the plus side I have learned a lot.”

I like how he can still look at the plus side after all that work! He’s working really hard. Navy nuclear school is an intense challenge. I’m so proud of him.

(I’m not sure what BE is. PFA is physical fitness assessment. The military loves acronyms. Phasing up means he gets a new set of privileges. As he progresses forward from boot camp through school, he is allowed certain extra freedoms as he earns them from performing well. Freedoms such as wearing civilian clothes at specified times and extending his liberty radius and so on. His Friday afternoon out was his first time off the base since he’d arrived. He went to Charleston and found a restaurant where he could eat some seafood because I keep telling him they have the best seafood in the world there.)