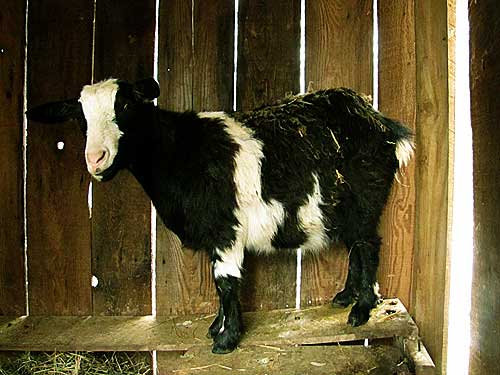 Since Sprite rejected her baby, I’ve been holding her and making her let her baby milk so he could get the colostrum. Today I thought if she was still fighting me, I’d let her out of the goat house. Sprite is a pretty calm, quiet goat. She and Fanta both have peaceful personalities. They stay out of Nutmeg’s and Clover’s way. They memorize Bible verses and sing camp songs. That Sprite should turn out to be such a bad mother was a real surprise. She is young, about 1 1/2. This is her first kidding.

I decided to keep trying today to let her milk him–his own mother’s milk is the best thing for him, and the best way for him to get it is directly from her. She has not fought me as hard today. I have to hold her, but she tolerates it with less stress. She still won’t allow him to nurse unless I’m holding her, but she is letting me hold her without fighting me (much). I have also given him the bottle today, just to ensure continued acceptance of the bottle in case I do have to take him away from her completely.

He’s also still nursing sporadically on Fanta. And what was really a little bit funny this morning was when he was nursing Sprite on one side while I was holding her, one of Fanta’s babies came over and started nursing her on the other side! Those babies, they’ll take candy from anyone. Goat mothers, even good ones, don’t stand still long, so when I’m holding Sprite, she’s an open tap. The mother who doesn’t want to nurse anyone is nursing everyone.

Well, to a limited extent since she will only tolerate it when I’m holding onto her.

So, I’ll take it day by day, making repeated trips to the goat house to help Sprite be a mother. Whether she likes it or not. If things start to get rough with her behavior, I can always take her out. She seems calmer today rather than rougher, so for now, I’ll give this a try–AND keep him accepting the bottle. The longer he can get her milk right from her, the better. And he’s a persistent little devil. He wants his milk. 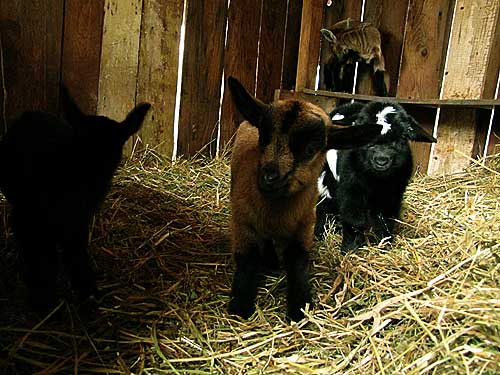 All the babies–Fanta’s two on the left, Sprite’s baby behind them, and Dr. Pepper on the shelf in the background.