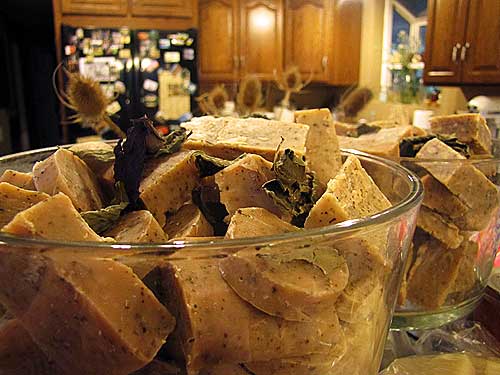 Last-minute preparations are underway. We were up late last night making soap in advance of the party so that soap set and ready to come out of molds can be brought out at the end of the demonstration. I also have two bowlfuls of milk and basil soap that I made in advance in sample sizes that attendees are free to take.

The soapmaking demonstration will be a two-parter, with mixing lye and cooking soap then a second part to show how you know the soap is finished cooking and how to place in molds. (After that we’ll bring out the set soap that we made last night to unmold and cut.) There will lots of other demonstrations, including steam juicing and pickle-making as well as taking turns milking Beulah Petunia. I’ll also have some of my displays out from Heritage Days and have butter-making. The petting zoo will be open all day. Clover is taking a shower and putting her makeup on right now. She can hardly decide what to wear.

And I think there’s gonna be a lotta food.

There are a bunch of fun door prizes, including two Chickens in the Road calendars and two Ball Blue Books along with a variety of other things, some of which are being brought by attendees to donate to the door prizes table.