We’re expected to have some snow later today, with temperatures dipping into the teens overnight, and I’ve learned at least one thing since I’ve moved in here–check all the outside vents to make sure they haven’t come off somehow. If they’re off, that lets in cold air that can freeze pipes. 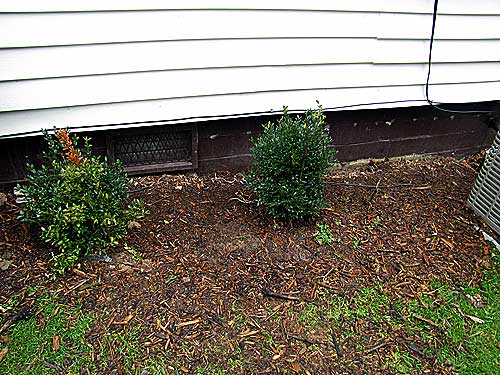 Actually, I’ve learned two things–double-check the bladder tank in the barn to make sure the heat tape is still plugged in, nothing’s tripped or anything. My tank is now also wrapped in an insulation blanket. I should be good to go!

By the way, I don’t have a generator here. If I did, it wouldn’t do me any good because I never could start that generator at Stringtown Rising. I can’t pull the starter hard enough. I tried and tried. If I’m going to have a generator, I need a button-start generator. And those are expensive. (Any generator is expensive, but they are even more so.) In any case, I can’t afford any generator, so I will be doing without this winter. If the power goes out and it’s freezing, I’m going to find every blanket in the house and pile it on top of the insulation wrap on that tank!

For heat, while there is free gas here, the heat in the house comes from a gas furnace with an electric blower, so it will be no good in a power outage. There is a fireplace here, but it has a very small Buck Stove insert. You can hardly get two small logs in there at the same time. It’s for looks. However, there is a gas wall unit in the studio, so the heat would stay on there and that is where we’ll be headed. Public water has been brought to this property and I’m planning to have it hooked up in the studio as soon as possible because in times of a power outage, public water would still be running. Having an alternate water source in the studio will also mean that if something is wrong with the well, I can get the public water there. If something is wrong with the public water, I can get well water in the house. Options are GOOD. The water heater is gas-powered, so in the case of a power outage, I would even have hot water over there. If there is a long power outage, I would be warm, and could flush toilets, take hot showers, even cook (lighting the gas range in the studio with a match), and wash dishes. If I had to haul water from the studio for the animals, I could. So, I may be generator-less, but that’s my winter power outage plan at Sassafras Farm. I’ll manage, and it won’t be too bad.

Well, I don’t have the public water hooked up yet. But I do have the plumber coming back to take a look at that on Sunday and tell me what it would take to tie it in to the studio’s plumbing, cutting the studio off from the well. (Public water in the studio is also a requirement for a commercial kitchen, so tying in to the public water will serve an additional purpose for the future.)