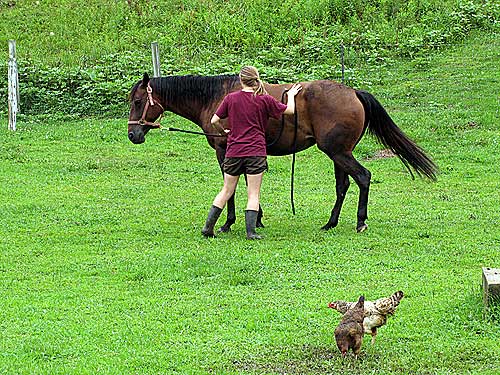 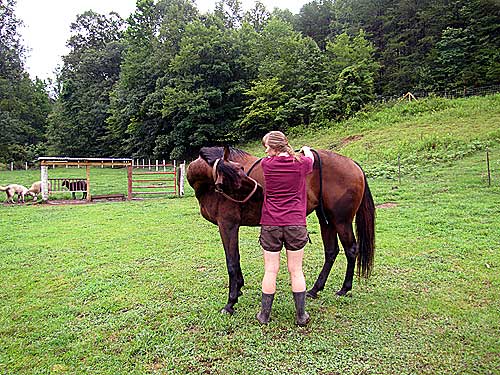 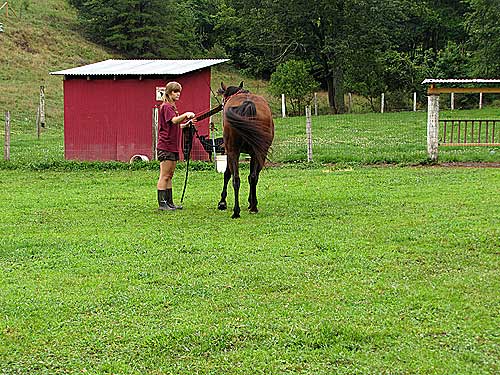 It’s been raining a lot here (suddenly! all at once day after day! after a long dry spell) and Morgan hasn’t ridden Zip yet since we got her home. Most evenings, riding time, it’s been storming, but generally Morgan just hasn’t been in a hurry to ride her. She wants to get more comfortable with Zip on the ground before she takes her out for a ride here. Zip has been very well-behaved and we’re thrilled to death with her.

Morgan practicing with Zip in the cross ties. 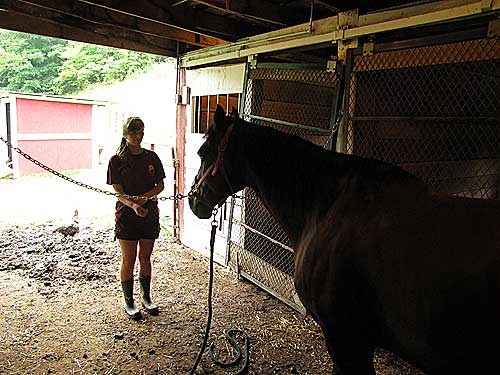 She’s been obsessively cleaning the barn. She spent three hours yesterday over-cleaning all three stalls then organizing her “horse” stuff. 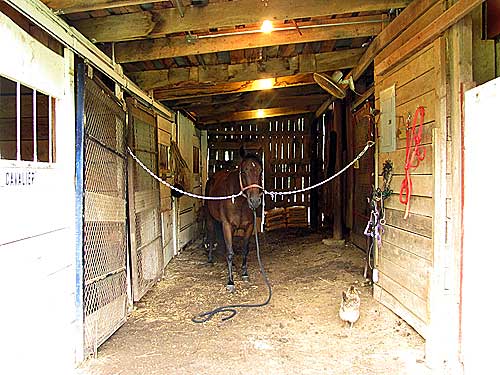 After she took down the cross ties and removed the lead rope and halter, Zip stood as if she was still cross tied for about five minutes before she moved, which was kinda funny. We love Zip.

Meanwhile, I’m working with something a little tinier. 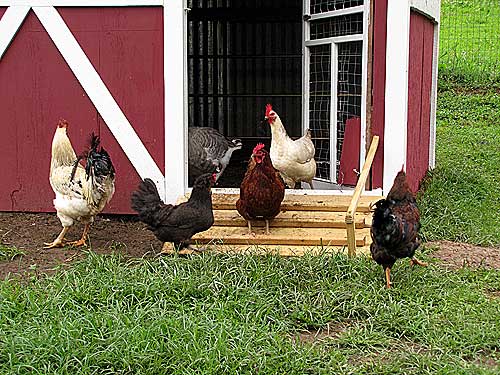 I got about 15 of them (including the goose) in the house last night.

There were a lot of questions/comments re the metal roosts. Metal roosts (supposedly) are healthier in terms of mite prevention. This is also true of PVC, though I’d have to buy PVC, and first you’d have to hold a gun to my head to get me to spend money on a chicken roost. On the downside, metal conducts cold and may be slippery (though I noticed my chickens had no trouble roosting on them last night). I’m more concerned about the cold factor, which I hadn’t considered when I was obsessively re-purposing materials for the chicken house–so I’ll be replacing them sometime soon with some free straight limbs from the woods. As to nesting boxes–this is an 8 x 8 space. There is plenty of room for nesting boxes if/when I want to add some. If I add some, it will be toward winter when the chickens are likely to spend more time in the house. The chicken house has ample space for feeders and waterers as well, if they end up wanting to hang in the chicken house a lot this winter. Around the back of the house, we left a very large overhang because I also might add a small run there for growing chicks. I could also build out to one side for an addition if I decide I want to try rabbits, or want more room for chickens. The most pressing thing I want to do right now with the house is get a LIGHT in there! Meanwhile, I’m just happy to have a chicken house.

As I told Morgan yesterday when she was obsessively cleaning the barn and pointing out to me spots where it was still leaking in the alleyway and the stalls, not to mention a drainage issue we have in the third stall, “We are just happy to have a barn.”

We’ve lived here for just under eight months. When I start going over the list of things that need done–the drainage issue in the third stall, lingering leaks in the alleyway and the stalls even after the roof re-coating, drainage issues in the barnyard, shelters that still need built in the pastures, clearing and brush hogging (not to mention a brush hog) for the far pastures, finishing the studio deck with incorporating a container garden, installing a second generator at the barn, leak issues in the cellar (notice there are a lot of water problems here), deep need for a riding mower and a weedeater that works, and on and ON, it can get overwhelming. The list seems nearly endless. Old house, old barn, old cellar. (If you buy an old farm, plan on a lot of WATER PROBLEMS.) Then I make another list of the things I have done in only eight months. All-new plumbing in the house and studio, repaired septic, remodeled studio, new or repaired fencing in almost every field, new gates, re-coating the barn roof, installing a hay elevator, putting up half the hay for this winter, a generator for the house and studio for the winter, a new chicken house, remodeled the goat house for winter use, a covered creep feeder for the goats, and I’ve even managed to keep this humongous place mowed and trimmed. We got two horses and are learning to ride and train them. And Glory Bee did get pregnant!

Somehow the rest will get done, too.

Just give me eight months.