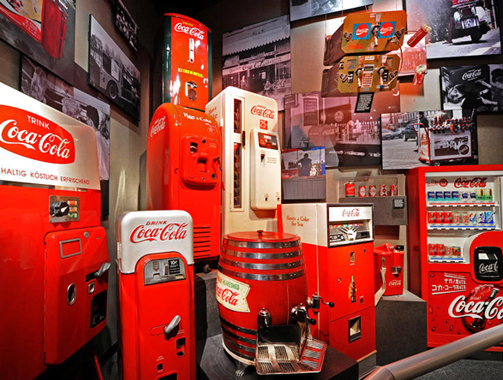 THIS GIVEAWAY IS CLOSED to ENTRY NOW.

Heads up! I’ve got four tickets to give away for the World of Coca Cola attraction in Atlanta! The West Virginia University Mountaineers take on the Crimson Tide in the Chick-fil-A Kickoff Game on August 30. Maybe some of you will be going to the game! If not, the tickets are also good through the end of the year. (NOTE: These are tickets to the World of Coca Cola, NOT the game.)

If you are going to be at the game, there are a lot of big events going on in Atlanta that weekend – specifically for the Kickoff Game. Here’s a list of the family-friendly things going on:

1) Fan Days at the World of Coca-Cola are August 26 through September 2 — get a glimpse inside the world’s #1 brand and see what the fizz is all about.

2) Visit the new College Football Hall of Fame. The attraction is going all out for its Grand Opening on August 23. Celebrate the rich history of the game and make memories of your own with historic and contemporary artifacts, interactive multimedia displays, children’s activities and more.

3) For some free fun, grab your fellow fans and hit up Tailgate Town on the West Plaza. How can you resist food sampling, games, giveaways and a BBQ cook-off?

4) If you want to take your tailgating up a notch, purchase tickets for the Mountaineer Madness Team Tailgate at the Georgia World Congress Center. Yes, that’s an air-conditioned tailgate featuring pregame entertainment and a delicious buffet.

5) Refresh yourself with an ice-cold drink and cheer on your favorite team at its Pep Rally when you visit the FanZone presented by Coca-Cola Zero. Don’t miss out on the dozens of interactive games and sponsor attractions.

6) While walking down the Atlanta streets, it’s likely that you’ll find yourself in the middle of a science-fiction scene. That’s because Dragon Con is returning to Atlanta this Labor Day weekend. For some fantastical fun – and lots of Storm Troopers – check out the annual parade.

Entry Info: The people at World of Coca Cola are offering FOUR tickets to the World of Coca Cola attraction, to be provided to ONE winner so you can bring your friends and family with you. Tickets are good through the end of 2014. To be in the running, just leave a comment to let me know that you want it. Valid entry deadline is tonight (August 22, 2014) at midnight. ONE winner will be chosen by random comment number drawing to receive the tickets. Return to this post to check if you are a winner. Post will be updated tomorrow (August 23, 2014) by or before noon. Tickets will be sent to the winner by the World of Coca Cola people. I do not have the tickets in hand and will not be the one mailing them–and I am not responsible for them.

P.S. I’m not getting anything out of this. But I love Coke, it’s actually my favorite soft drink, and I thought one of you would enjoy the tickets!

UPDATE: The winning comment number is #5, weimarmama. THIS GIVEAWAY IS CLOSED TO ENTRY.