Ross learned how to drive the tractor and started working on the sheep’s hay mess, doing some grading and cleanup in the barnyard for me. 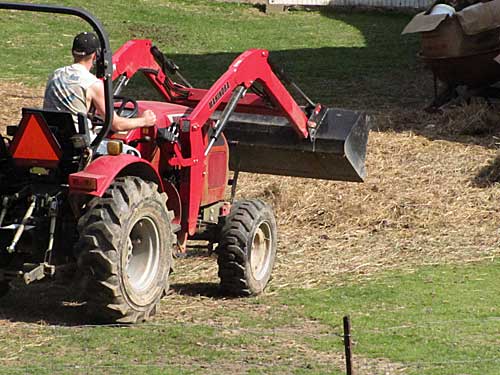 And (in between tractor work) Morgan was ready to get Patriot saddled up. 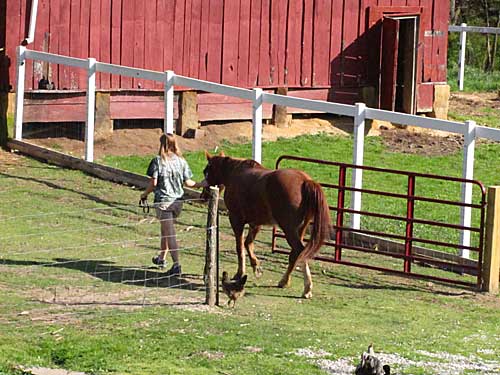 This did not go well, and we’re not sure why. Patriot didn’t want to accept the bit. I don’t think it was the specific bit as he refused the bit entirely, would not open his mouth. At all. Not wanting to force him, we stopped, took a break, taught Ross to drive the tractor, let Patriot browse in the pasture, then went back to get him a few hours later. He came willingly, everything just fine, till we tried to put the bridle on him. Again, same thing, he refused to open his mouth. (Yes, tried the thing about putting fingers to the side of his mouth. He just wouldn’t open his mouth.)

At this point, we called the horse trainer up the road. He came down, and had the same problem, only he’s better at it, of course, and he got the bridle and bit on Patriot and saddled him up. Patriot was completely calm about it all except for taking the bit, which he resisted. Feeling a little unsure of Patriot’s behavior because of the bit resistance, the trainer didn’t want to let Morgan ride him without a lead. But, oh, she so wanted to ride her horse! So he started to walk her around the barnyard with Patriot on the lead. They didn’t get far before Patriot bucked and threw Morgan.

We took everything off Patriot and put him back in the pasture. Morgan does not want to get back on him.

At the moment, I’m not sure where we are on our horse journey.