I have a treat for you today! Remember me, I used to be a romance writer? I made lots of great writer friends when I was a romance writer (romance writers are a close bunch!) and one of them is Jill Shalvis. Her new book, Simply Irresistible, begins her Lucky Harbor series–sexy women’s fiction novels centering around three estranged sisters and the falling down on its axis beach inn they inherit, where they find hope, home and….love. (HINT! I’m giving away THREE copies of her new book! And she also has a free knitting pattern to share, right here!) 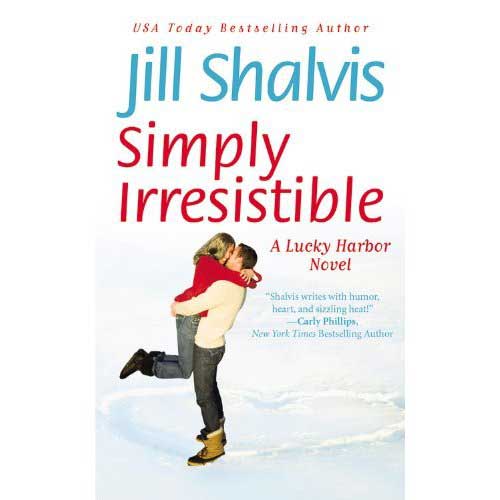 Here’s an interview with Jill about the series:

When I started this series about three estranged sisters who get stuck together running a beach resort, I decided I was out of my mind. I don’t have sisters. I have a brother, and we like each other just fine. Then at the dinner table that very night, my three teenage heathens started bickering and fighting, and I just stared at them in awe and wonder.

I had my fodder! “Keep fighting,” I told them–much to their utter shock since I’ve spent the past fifteen years begging them to get along.

After that night, it was a piece of cake to write the sisters–Maddie, Tara, and Chloe–their claws barely sheathed, with resentment and affection vying for space.

So then all that I had left to do was find the three sexy guys who could handle them.

It just so happened that, at the time, my neighbor was having an addition put on her house. For six glorious weeks, there were a bunch of guys hanging off the roof and the walls, in perfect line of sight of my office.
Which is really my deck. It’s a wonder I got any work done at all.

So I sat in the sun and wrote while in the background cute, young, sweaty guys hammered, and sawed, and in general, made my day.

And on some days, they even took off their shirts. Those were my favorite days of all. But I digress….

I was working very hard, planning out conflicts and plot pacing and trying to nail down my hero. And given what I was looking at for inspiration, it shouldn’t be any surprise at all that the hero for this first book in the Lucky Harbor series, Simply Irresistible, turned out to be a master carpenter.

And a very sexy one at that.

I’m actually writing book two right now. I keep going out on the deck, sitting and patiently waiting, but my neighbor hasn’t hired any more sexy carpenters. Darn it.

Perhaps I need a new addition myself!

Jill’s publisher produced a knitted scarf pattern to go with the book because the heroine gives up potato chips and tries a nonfat stress reliever–knitting. Here’s the pattern:

A few snowflakes floated down, soft and lazily spinning in the wind, and through them Jax cocked his head, watching her as if something about her didn’t quite add up for him.

She could have told him not to bother trying to figure her out. No one had managed yet, not even herself.

“Working on it,” she said and gave him a small smile. It was hard not to, he just had that kind of face.

He returned the smile and stepped a little closer to her, which was when she discovered several things.

He smelled good. Guy good. As in she wanted to inhale him. Her body tingled, suddenly brought to a hyper awareness that felt almost foreign.

When she opened her eyes again, he was even closer, and his eyes weren’t the solid warm caramel she’d thought but had flecks of gold dancing in them as well. She could have happily, willingly, drowned in all that deliciousness. Death by deliciousness.

Not a bad way to go.

You can find out more about Simply Irresistible here at Barnes and Noble where you can buy it online, or just go find it in your local bookstore.

WIN AN AUTOGRAPHED COPY FROM JILL!!!!!

For the first autographed copy:

Leave a comment letting me know you want it. One winner will be drawn by random comment number. Eligible entries end at midnight Eastern time tonight (September 28). The winner’s name will be updated at the bottom of this post by 9 a.m. tomorrow (September 29).

I will be giving away TWO MORE COPIES.

You can visit Jill and her fun daily blog here.

UPDATE 09/29/10: The winning comment number, drawn by random.org, of yesterday’s Simply Irresistible giveaway is #94, Angela. Email me at CITRgiveaways(at)yahoo.com with your full name and address! Two more books to give away!

The contest is closed on this post. Go here for the second giveaway of this book.