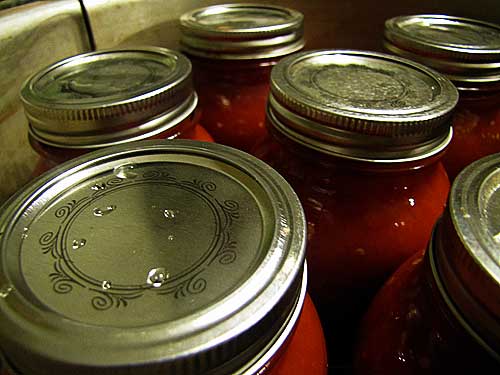 In the past four days, I’ve canned over two dozen quarts of stewed tomatoes and tomato juice. Mostly stewed tomatoes, a few jars of juice. After the blah-blah-blah (I’m so specific!) of getting them blanched and peeled, I quarter them and pack them in jars with lemon juice, salt, and their own juice. I’ve learned over the years about packing them hard and not adding too much juice (or later you end up with a jar that’s half tomatoes and half water). I strain the juice that’s left over to get the seeds out and can that, too. It’s really good in chili and stews.

It takes me four days to can two boxes of tomatoes because I have a lot of other stuff going on. A fab canner intent on her task could do that in one day. You can do tomatoes in a boiling water bath, but it takes forever. I do mine in the pressure canner. Five pounds pressure, ten minutes. Good to go.

A couple dozen quarts of tomatoes isn’t half what I need for the year, and I haven’t done a lot of tomatoes up to now, so I really should do some more before they’re all gone. It was a bad year in the garden and I only got bits of tomatoes. I canned some, and even froze some in quart baggies, it was that bad. (No point running the canner for two quarts of tomatoes.)

How are you doing with your tomatoes? Are you stocked up enough? I’m so not.

For a chance to win: Leave a comment on this post and let me know you want it. You can just put (BBB) at the end of your comment or otherwise note that you want to be in the draw. One winner will be drawn by random comment number to receive a Ball Blue Book. Eligible entry cut-off is midnight Eastern (U.S.) time tonight (October 13). This post will be updated with the winner by 9 a.m. Eastern (U.S.) time tomorrow (October 14). Return to this post to claim your book if your name is drawn (or check the BBB Winners List).

UPDATE 10/14/10: The winning comment number, drawn by random.org, is #107, Mokihana. Email me at CITRgiveaways(at)yahoo.com with your full name and address for shipping!