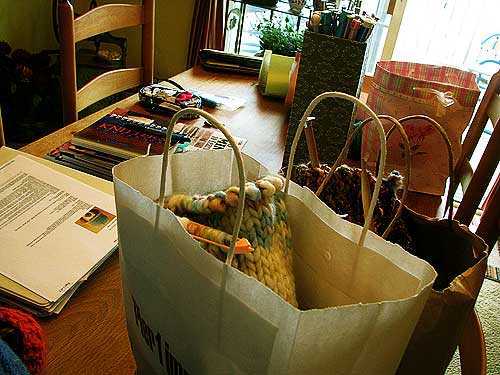 Missy at the goat farm treated me to a knitting workshop for one. It is a true pity that I am not a better knitting student. I don’t know what’s wrong with me. I just can’t purl. Why can’t I purl? Why? Missy, who can purl, has a drool-worthy array of supplies and notions. 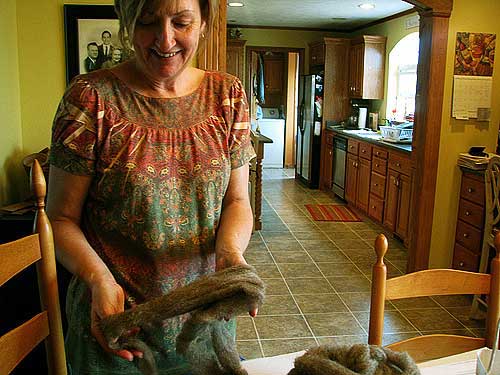 Here, she’s showing me what wool looks like when it’s ready to be spun. 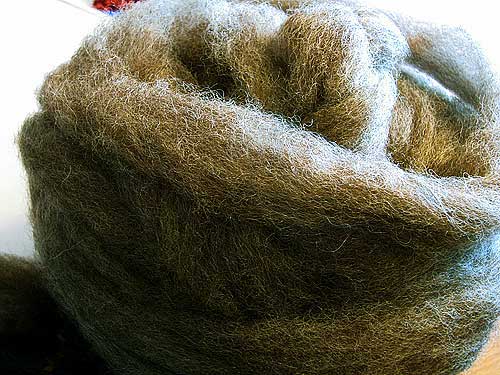 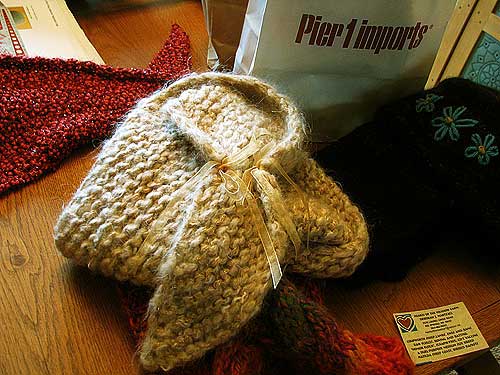 This is why I want to learn to knit. I want to make pretty things.

Knitting really only requires two things–a pair of knitting needles (size 8 is good to learn with), and a ball of yarn. Missy has 10,486 pairs of needles. 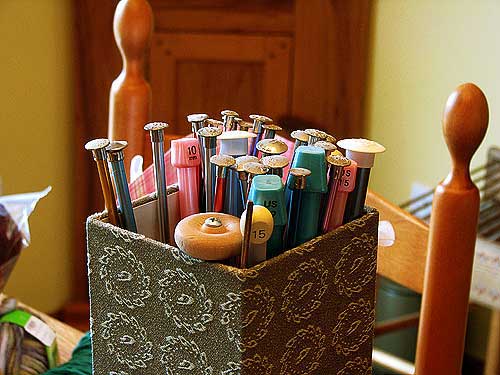 She is also very organized. She has zip bags of needles…… 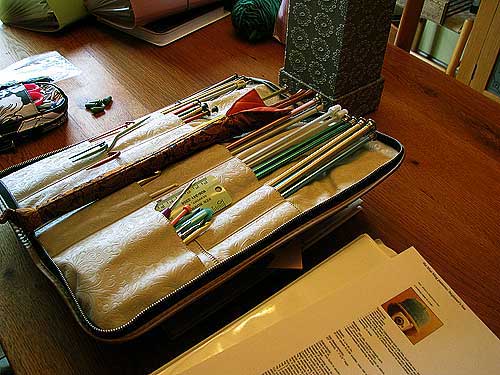 ….and indexed folders of needles. 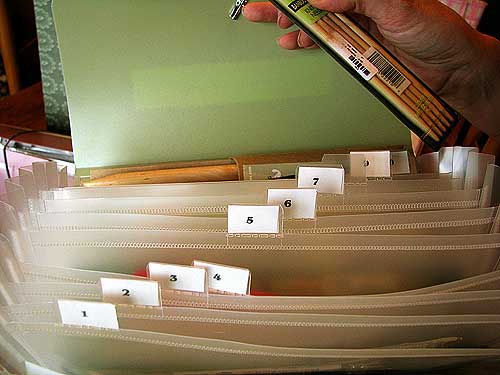 Circular and straight needles, needles and more needles! If I was a needle, I’d want to live at Missy’s house.

She has a lot of knitting doo-dads, too. Stitch gauges and markers, tape measures and point protectors. Who said all you needed was a pair of needles and a ball of yarn? Oh, that was me. And I can’t purl, so don’t listen to me. 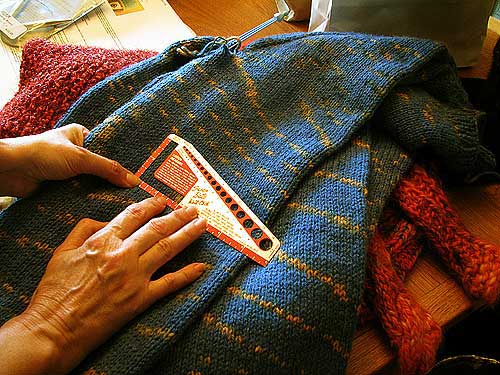 She taught me to cast on two ways. One way is to make a slip knot, like in crochet, and the other way involved a complex routine making triangles with your fingers and yarn two hundred different ways then you end up with your whole first row of knit stitches. I could not repeat that method by myself if someone was holding a gun to my head, but I still liked it better than the slip knot method. It’s like cheating and getting your first row for free.

Missy operates a full-service knit spa, so she poured me a glass of wine. 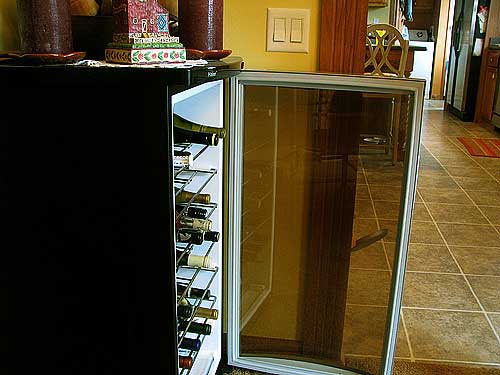 See? Was this not the best knitting lesson ever? If I was a needle and I lived at Missy’s house, I’d be a drunk needle.

They have a lovely ridge-top view off the back of their house. 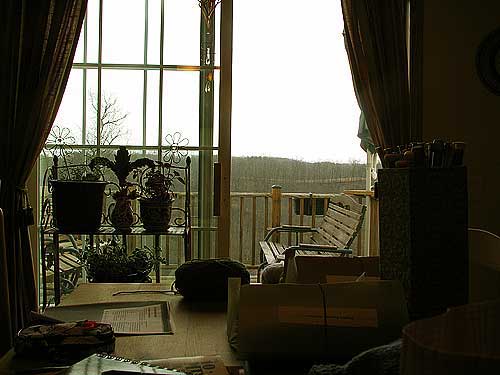 We drank wine….and enjoyed the view….and talked….and Missy showed me how to knit. 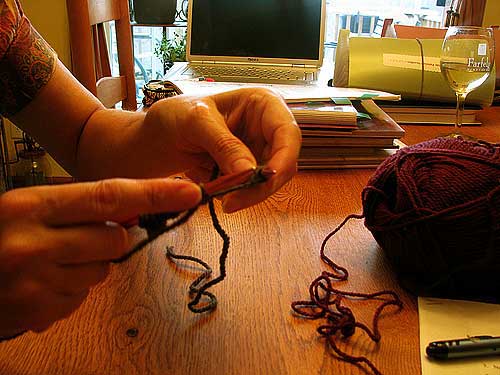 And now I need her to show me how to purl again. (Good thing she has the patience of a saint.)

I knew knitting was going to be hard! When I was 10, my Oklahoma grandmother told me she would teach me how to knit or crochet–pick. I said, crochet. I mean, c’mon, there’s only one crochet hook, there are two knitting needles. I was smart for a 10-year-old. I learned how to crochet and I used to crochet quite a bit. I made simple stuff like potholders and baby blankies and booties for my kids. I quit crocheting years ago for some reason, but I know I could pick it up again easily and I’d love to learn how to do more with crochet than I used to do. I want to crochet again. But, I’m afraid to pick up a crochet hook until I’ve got this knitting thing down. I know if I pick up a crochet hook before I learn to purl, I’ll never pick up knitting needles again.

Because crochet is so much easier and I already know how to do it.

And I’m stubborn and I want to learn to knit.

Speaking of crochet, a couple years ago my kids were getting ready for 4-H camp, picking out their camp classes, and Morgan came to me and said, “What is crotch-it?” I had to make her show me the sign-up sheet before I could figure out what she was talking about. Then, no kidding, ten minutes later, one of my sons came up to me and said, “What is crotch-it?” I so should have told them that crotch-it was another word for “bb gun shooting” because they would have totally signed up for that and I could have been laughing all camp week thinking about my tomboy girl and my football player in crochet class….. (I always have my BEST ideas after it’s too late!)

Back to knitting….. I just need Missy to show me how to purl about twenty more times and I’m sure I’ll have it down pat!!! 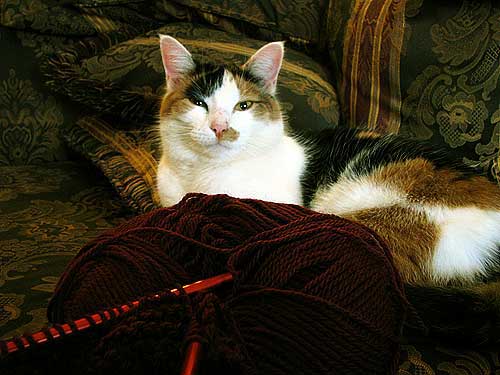 Yeah. Even the cat is suspicious about that.